In the latest in our series focusing on the England squad for the forthcoming Commonwealth Games, we speak to the England men’s and women’s coaches and team leader. 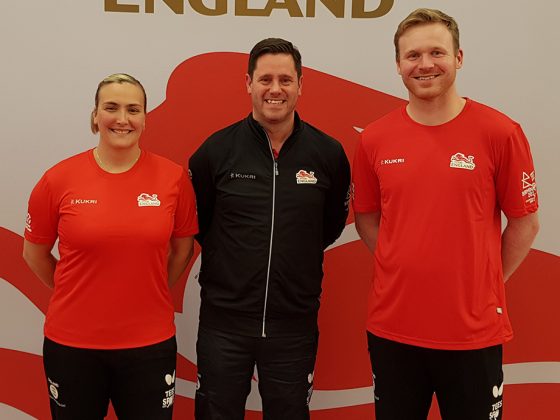 In the latest in our series focusing on the England squad for the forthcoming Commonwealth Games, we speak to men’s coach Gavin Evans, women’s coach Kelly Sibley and team leader Matt Stanforth.

Para coaches Andrew Rushton and Matt Kenny will be featured at a later date.

There’s not much that Kelly Sibley hasn’t seen at the Commonwealth Games, with four appearances in her playing career yielding joy and disappointment.

The despair of women’s team bronze medal play-off defeat in 2010 was followed by the delight of a Mixed Doubles bronze alongside Danny Reed in 2014 and a historic team bronze in 2018 – which brought the curtain down on her career.

Now Sibley is bringing all that experience to bear by leading the England women’s team from the bench.

“The two bronze medals were both amazing memories, amazing experiences, and hopefully now I can take from those experiences into Birmingham,” she said.

“Obviously, there were a lot of lessons learned during the previous Games. I’ve competed in four and some have gone to plan and some not to plan. I’ve been on the wrong end of things and also on the right end of the stick, let’s say.

“I’m hoping I can bring all my experiences that I’ve learned from the playing days into the coaching days and hopefully give than information to the girls moving into Birmingham.

“We’ve got kind of a new team, really. We’ve got two players that have competed at previous Games and we’ve got two newbies coming in – I’m really excited for those two players. Hopefully they can just come together as one.

“Of course, we want to be on the podium in a home Games, that’ll be the absolute dream. But we can’t get too carried away with anything. We’re just going to go in, give it our all, hopefully get the spectators behind us and you just never know, really.”

Medal expectation in the men’s team are understandably higher, with three players inside the world’s top 100 and another just outside – and the second-ranked player in the tournament in the shape of Liam Pitchford.

Men’s coach Gavin Evans admits the sights are being set high, with the opening team event a chance to improve on bronze in 2018.

“We’ve got to be looking at getting some gold medals for England,” he said. “First and foremost, we’ve got the team event and that will be our first chance to get a gold medal.

“Team is a real big focus for us and we’re working on our doubles pairings all the time. The lads are behind each other 100%. All we can do is play every individual match, play for every point, get behind each other, work together and hopefully do a little bit better than we did last time.”

For Evans himself, it’s a first taste of the Commonwealths and he added: “I’m really looking forward to it, it’s my first Commonwealth Games, great that it’s in Birmingham, and we’re in a really good place at the moment and we just can’t wait to start competing.

“I think I bring a lot of energy to the team. I know the lads really well and we’ve been working together for a good number of years. Our goals are aligned and we’re ready to achieve them.”

Overseeing it all is team leader Matt Stanforth, whose Games preparation started several months ago.

“It’s been a really long process, he said, “everything from getting the funding from Sport England to support the preparation for the event, then working with the guys at Team England through all the preparation into it – so everything from the physiotherapist, the accommodation, all the protocols . . . obviously we’re still living in a covid era.

“It’s bringing all the pieces together so we can help support the athletes so they can deliver the performances they’re capable of on the day at what will probably be the biggest event since London 2012.

“It’s my first time going to a multi-sport games. I’ve obviously worked with the England teams for a number of years, which has always been fantastic. I’m really excited, looking forward to working with our team but also the wider Team England bit as well – looking forward to the opportunity.”