In the latest in our series focusing on the England squad for the forthcoming Commonwealth Games, we speak to Sue Bailey. 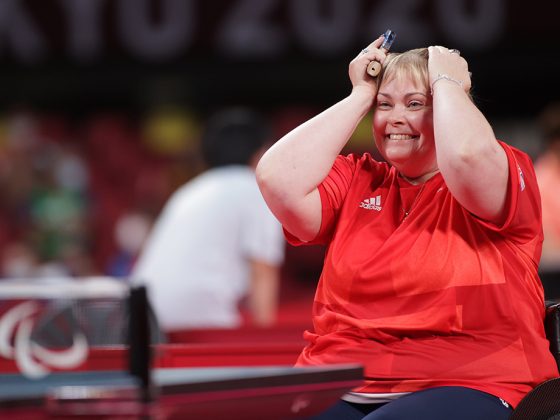 In the latest in our series focusing on the England squad for the forthcoming Commonwealth Games, we speak to Sue Bailey.

Sue Bailey is targeting a remarkable golden hat-trick when she competes at the Birmingham 2022 Commonwealth Games.

The Class 4 wheelchair athlete was gold medallist back in 2002, when England last hosted the Games – the first time that table tennis had been included in the Commonwealths.

She followed up that Manchester triumph by defending her title in Melbourne in 2006.

So a unique treble is the target back on home soil as wheelchair events make a welcome return to the schedule.

“Being able to win gold in Manchester will always be so special to me as my dad was terminally ill at the time and all he wanted to do was see me play, so to get him transferred from the hospital to watch my final and to win it for him will always be such a memorable experience,” said the 49-year-old from Barnsley.

“Being double Commonwealth Champion has been incredibly special and I feel so proud to have accomplished this, but it would be a dream come true to win a third gold.

“At the same time, it does also put you under more pressure as well, as it is what is expected, but I just want to play the best that I can on the day and hopefully that will be enough to achieve this.”

As well as her Commonwealth accolades, Bailey was European champion in 2005 and last year won a team bronze, alongside Megan Shackleton, at the Tokyo Paralympics, finally securing a medal at her sixth Paralympics.

She said: “I know how well I can play against the best in the world and if I can play as well as I do in training, I know that I have as good a chance as anyone to win that medal if I can stay relaxed and play my game.

“My training has been going really well with my partner Scott Robertson and coaches at the EIS (English Institute of Sport in Sheffield).

“Being able to compete in front of a home crowd is something all athletes dream about as their support really lifts you to play your best, which I am so looking forward to. I am always so proud to compete for GB, but it is just as special to play for my home nation of England as well.

“The Commonwealth Games is the only event that we are in a combined team with our able-bodied team members, and it is always special to be able to compete at home in front of family and friends who normally don’t get to see me play.”

“I would love to win another gold in Birmingham in front of a home crowd but it will be a tough competition as always.”