In the latest in our series focusing on the England squad for the forthcoming Commonwealth Games, we speak to Maria Tsaptsinos 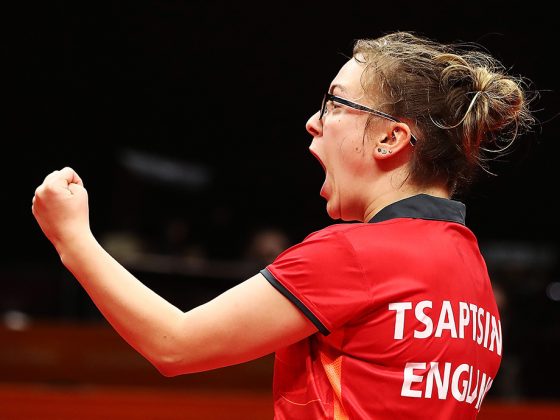 In the latest in our series focusing on the England squad for the forthcoming Commonwealth Games, we speak to Maria Tsaptsinos.

Maria Tsaptsinos says selection for the Commonwealth Games squad is reward for her hard work since covid restrictions lifted.

She will appear at her second Games, having played a key role as England won women’s team bronze at the last Games in Gold Coast in 2018.

Tsaptsinos, who turns 25 today, has had a good year so far, having won the Women’s Singles title for the second time at the Mark Bates Ltd Senior Nationals, beating Tin-Tin Ho in the final in March.

Tsaptsinos said: “I feel like I’ve put in a lot of hard work in the last 10 months or so, getting back after covid. I’ve been going through it as a process to get to my peak, in fitness and on the table. I’ve put the hours in.

“Gold Coast was very exciting and it was that first experience of the Commonwealths, so I have a lot of different feelings towards it this time. I’m less excited by actually being at the Games, but I’m excited to showcase what I can do and more focused on my performance than on taking it all in.”

Tsaptsinos believes the field is open and that England can challenge for medals. It will be a busy event for her – as well as the team event she is playing Women’s Doubles, Mixed Doubles and Women’s Singles.

“Everyone is within touching distance and I don’t think there’s anyone who stands out from the crowd,” she said.

“Obviously, you’ve got India . . . Singapore with (world No 16) Feng Tianwei but their other players are quite young and coming through.

“We’ve got Tin-Tin spearheading the team, and she’s capable of anything and of rising to the occasion. There’s a lot of emphasis on doubles because that will be crucial. We’re looking forward to starting that process and gelling together.”

Tsaptsinos is also looking forward to the home support, including from family and friends who will hopefully be among the spectators.

She said: “Playing in front of a home crowd is a big advantage and there’s a lot of people who want to come and support me and the team, so it’s going to be good to share the experience with people who haven’t seen me play internationally before.”