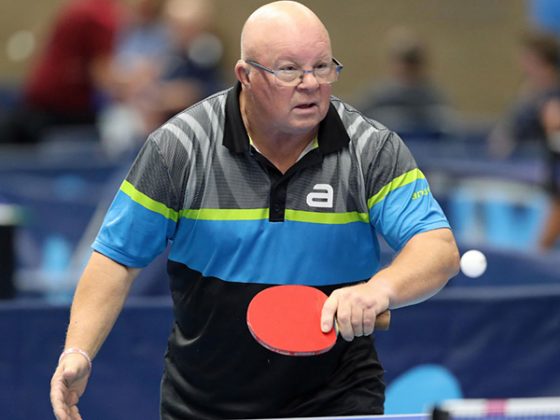 It is with great sadness that we announce that Melvyn Lovegrove, known to hundreds as a player on the veterans’ circuit and as the WBL and VBL photographer, passed away this week at the age of 70.

The news comes just a few days before the Women’s British League in Wolverhampton, at which Melvyn was due to once again be behind the camera, recording the action and presentations as the titles are decided.

There will be a small ceremony during the weekend to remember him.

Gary Wood, British League Secretary, said of Melvyn: “He was a super friend to BL and always wished to do his very best for BL events.

“If requested to do any job in his photographic role, by staff or volunteers, he would always willingly do it to his usual efficient and high standard. His photographs will always remain in the Table Tennis England and British League archives and he will be remembered in that way for ever.

“At BL events, when staying over, he would always be first down to eat his usual hearty breakfast, whilst making sure he greeted everyone with his usual big smile and personal introduction to those who he considered he had not met before or to those who he considered had just forgotten him. A great guy who will be sorely missed on the BL circuit.”

John said: “Melvyn was a great friend, and will be sorely missed at BL events. Always a smile on his face as he went around taking photographs, and indeed his photos were excellent, seeming to capture the energy and enthusiasm of his subjects.

“I, along with fellow friend and umpire, Sheila Walshe, would regularly have dinner on a Saturday evening with Melvyn at Veterans’ British League weekends; happy days.

“Melvyn may no longer be with us, but he will never be forgotten; one of the greats of the table tennis world.”

From the Table Tennis England perspective, not only was Melvyn an excellent photographer, who perfectly captured the action and essence of the British league weekends, but he was also a pleasure to work with, utterly reliable and simply a thoroughly nice man.

Our thoughts are with his family and friends at this difficult time.