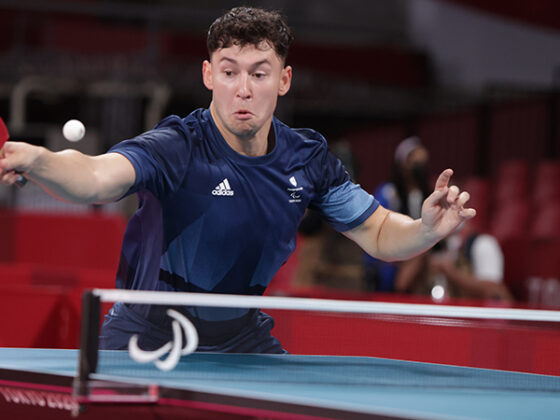 Wilson’s preparation for Tokyo was hampered by a knee injury and he was disappointed to lose in the quarter-finals of the men’s class 8 singles but went on to win his third Paralympic bronze medal in the team event with McKibbin and Shilton.

“I’d played one competition in two years, and you can’t expect the world and do everything you want to do when you haven’t competed for so long. That takes time and I expect myself to start performing better and better once I start competing more. I’ve done a lot of training post-Tokyo and I’m really enjoying it and feeling good physically. It is nice to have competitions again and I’m really excited to compete and see what I can do.”

Also competing in Platja d’Aro are 22-year-old Welshman Joshua Stacey, who just missed out on a medal in Tokyo, and Fliss Pickard, who bounced back from the disappointment of not qualifying for the Paralympic Games by taking women’s class 6 singles gold in the Costa Brava Spanish and French Opens at the end of last year.

Stacey reached the quarter-finals of the men’s class 9 singles and team events in Tokyo and having missed out on a medal at his first Paralympics is using that as motivation to achieve his goals this year.

“It is definitely a massive motivation for me that I didn’t achieve what I wanted to achieve,” he said. “Leading up to Paris I am going to leave no stone unturned in terms of making sure every tournament I go to I have the best chance of winning it and I am someone people fear to play.

“I’m trying to improve my training level and I’m going abroad as much as possible to try and elevate my level as quickly as possible. I want to break into the top five or six this season – there are not too many tournaments in the year to try and do that, but I think if I play to the level that I’m capable of it is definitely a possibility.”

Pickard showed all her fight and determination when winning in Spain and France, in both finals battling back to beat Katarzyna Marszal, the world number six and former World champion from Poland, and is also looking to improve her world ranking this year.

“Winning those two tournaments has driven me over the winter months to push on from that,” she said. “I’m taking a great deal of confidence from it and I’m ready to go to Spain and hopefully get the hat trick. I want to try and get into that top four or five and really push up the rankings but for me it is about being the best table tennis player I can be.

“If I keep my processes right and go into every tournament and take each match as it comes, I believe I can do well. I’ve been working a lot with the S&C team on my movement and making me stronger and able to get to more balls. My movement has definitely improved massively so I’m looking forward to seeing how that goes in Spain.”