Referee Karen’s in a central role again at home Games

In the latest in our series focusing on the Commonwealth Games, which start this evening, read all about the competition referee, Karen Tonge OBE. 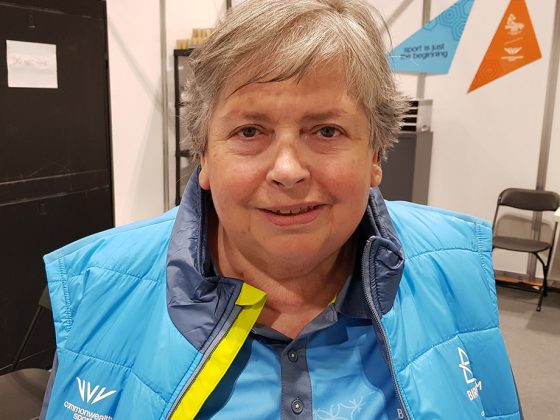 In the latest in our series focusing on the Commonwealth Games, which start this evening, read all about the competition referee, Karen Tonge OBE.

Karen Tonge OBE is once again playing a key role at a Commonwealth Games on home soil.

Karen (pictured above) was Competition Manager at Manchester in 2002, the first time that table tennis had been included in the Games.

This time around, she is the referee, supervising a contingent of international umpires, including 18 from England for the duration of the competition, which starts tomorrow.

Karen said: “I’m responsible for looking after the technical officials, dealing with any disputes – and hopefully there won’t be many, or none – or queries on the rules. I do the draws for the events – we’ve already done two for the team events and we’ve got 10 draws in all to do.

“It’s an honour to be part of the team. I was Competition Manager in Manchester in 2002, so to get the honour to be referee when it’s back in England is just amazing, I hadn’t expected it.

Karen has also been involved in training many of the umpires who will be on duty in Birmingham.

She said: “Table Tennis England have had a training programme to recruit more under-25 umpires and more women and this is seen through to the Games, they have been selected to come. We’ve got a good mix of ages, we’ve got a lot of young umpires at this event and there’s a good atmosphere among them.

“It’s been lovely training all the umpires and then working with them on Zoom calls during covid. Seeing how they’ve progressed up to the right standard to get selected has been good.”

“It’s seeing old friends and making new ones, that’s what the Commonwealth Games is about. I’ve got friends coming from New Zealand, Canada, Australia.

“The venue is amazing, they’ve done a really good job with it – very colourful. It’s vibrant and it reflects the Commonwealth.”