Umpire Kim Mudge is hoping her inspirational story of overcoming adversity to officiate at the Commonwealth Games will encourage others to follow her path. 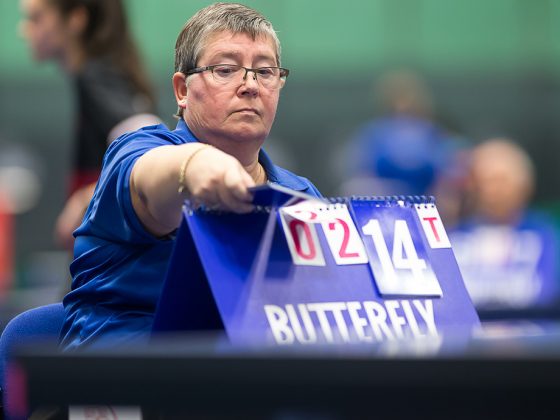 Umpire Kim Mudge is hoping her inspirational story of overcoming adversity to officiate at the Commonwealth Games will encourage others to follow her path.

The 59-year-old from Surrey will be one of 18 English and 18 international officials working under the direction of English referee Karen Tonge OBE at the Games, which get under way on July 28.

A former high-level player, Kim was forced to give up her playing career because of disability – she sustained a serious back injury while on duty as a volunteer Special Inspector in the Metropolitan Police in 2008.

At the time, she was representing England Veterans at over-40s, but she had to change her horizons at that point and began to work towards becoming an international umpire.

Kim said: “I think it is important to have goals in life even when your horizons can not be as high as other people’s.

“Therefore, since my injury and having to give up serious competitive table tennis, it has been an absolute goal of mine to be an International Umpire and represent my country at the Commonwealth Games.

“I love the atmosphere at these Games and have been a spectator in Glasgow in 2014 and even the Gold Coast in 2018.

“So having this selection means the world to me and them being on home soil in England this year is just the icing on the cake.

“I just hope that I too can inspire others and especially women and girls to realise that if I can take up being a Technical Official, then so can they and they can travel to umpire in other countries and at major events, like I do.”