In the latest in our series focusing on the forthcoming Commonwealth Games, read all about the team of umpires from England who will be officiating in Birmingham 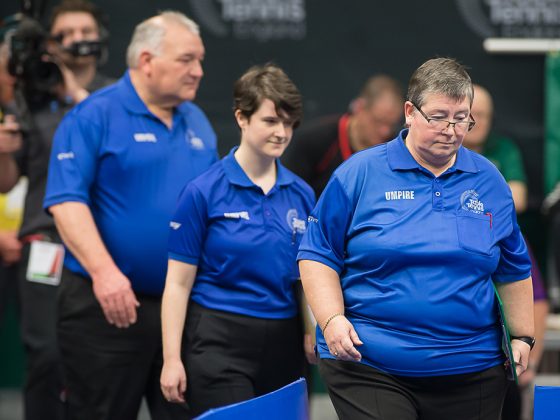 In the latest in our series focusing on the forthcoming Commonwealth Games, read all about the team of umpires from England who will be officiating in Birmingham. A feature on the referee, Karen Tonge OBE, will follow at a later date.

We also recently featured some of our umpires in the below video:

It’s a pleasure and an honour to be selected for the Commonwealth Games.

It’s a very different event in terms of being multi-sport, so we’re going to see athletes and officials from different sports and be able to share experiences.

So far, I’ve done only single sport events – only table tennis – so it’s certainly going to be a very different event. It’s an honour to be here for this event.

I’m delighted, I must say. It’s an honour to be able to umpire at that high level and I’m really looking forward to it.

I umpired at the Copper Box in London during the 2018 Team World Cup, but this will be a first major international multi-sport event.

Yes, there’s a bit of pressure, but I look forward to it.

Someone from the club shared an advert from Table Tennis England saying they were looking for younger umpires because there was a shortage, and that there was the chance to umpire at the Commonwealth Games.

I thought there was no harm in trying, because even if I didn’t get to this one, there’s plenty of other events.

At the beginning, I didn’t think I would have much of a chance, but as it went on they were telling me I was doing really well, so I began to feel more confidence I could be selected.

To be honest though, I’m still slightly unable to believe it. I’m really pleased with myself and thankful to everyone who helped me along, and to all the mentors.

The idea of being inside a major sports event and to umpire and watch up close some of the best players I’ve seen is going to be mind-blowing, and the atmosphere as well will be amazing.

Brian Jackson has been a huge help because he was the one who got me into umpiring in the first place when I was a young player at Blackpool Table Tennis Club.

He made a kid-friendly version of the umpires’ test which gave me a really good foundation for learning how to umpire as I’ve grown up with the sport. He’s always been very kind and encouraging, always available for questions and answers – he’s an absolute dream!

It’s going to be a fantastic opportunity and we’re going to see a great standard of play – and just to be part of it, I’m really excited.

I was in Glasgow and absolutely loved the event and I’m feeling very honoured to be selected for another one, especially being in the older age group.

I’m really looking forward to it. The second match I did at Glasgow 2014 was Canada versus Scotland and every point there was hand-clapping and foot-stamping. When Scotland won, the place was vibrating and the atmosphere almost hit you in the chest! Hopefully, that sort of atmosphere will be in Birmingham.

I’m very proud to see the diversity of our umpires and particularly the younger umpires because I’ve been helping with their training and making it possible for them to get to the required standard. I’m really looking forward to seeing how they do.

I feel very lucky to have been selected for my third Commonwealth Games as an umpire. It’s a huge honour and I feel very humbled.

I look forward to working with my colleagues (new and old) at this prestigious event and I feel very proud in helping and mentoring the new umpires who have had to cope with a steep learning curve, made even more of a challenge with the pandemic situation.

I was really excited when I heard the news about having the opportunity to umpire at the Commonwealth Games – it’s something I’ve worked for and always wanted to go to since I started umpiring.

I’ve had to go to a lot of events all around the country, it’s been really enjoyable and I’ve learned a lot of new things.

I’ve heard from umpires who’ve gone to previous Commonwealth Games and big events like them that it’s very enjoyable and the atmosphere’s absolutely amazing. I’m really looking forward to it.

I love the atmosphere at these Games and have been a spectator in Glasgow in 2014 and even the Gold Coast in 2018.

So having this selection means the world to me and them being on home soil in England this year is just the icing on the cake.

I just hope that I too can inspire others and especially women and girls to realise that if I can take up being a Technical Official, then so can they and they can travel to umpire in other countries and at major events, like I do.

I’m super excited and I think it’s a real privilege to have been selected to be at the Commonwealth Games as an official supporting the sport I really love.

I started umpiring at a course in St Neots and since then I’ve had a lot of support from experienced umpires at all the tournaments I’ve been umpiring – mentoring me and discussing situations they have been in and the tricky decisions you sometimes face as a table tennis umpire, so that’s a point I’m really grateful for.

It’s really exciting to have the opportunity to do such a big event. It’s mixed feelings that it’s so close to home, because it would have been an adventure to go somewhere else, but great to be in a home venue with a home crowd.

I started at county level about 10 years ago then decided to do the national umpire qualification, not realising I’d be at a level ready to do the Commonwealth Games – it wasn’t really on my radar.

Honestly, I never thought I’d end up at the Commonwealths – I’m really happy about it.

The atmosphere will be brilliant, with it being a home Games – it’s going to be amazing.

I want to see how the top players play – I’m looking forward to seeing (England No 1) Liam Pitchford because he’s someone who I’ve seen on TV and online and being able to see him at a home Games will be brilliant.

I got an invitation to the National Conference a few years ago and they were talking about this programme where they wanted to get a younger, more diverse group of umpires, with an aim to get them into the Commonwealth Games.

We had to put in a lot of effort over four years for that to happen – two written tests, two practical assessments, a few courses and about 20 or 30 events later I was told I was going to be umpiring at the Commonwealth Games!

I’m so excited about the opportunity.

A lot of Commonwealth people, athletes, support staff and officials of different ethnicities and faiths will be coming. They will be able to find a part of the city that is home to them. We are absolutely the best host you can ask for.

I was a volunteer at Manchester 2002 and an umpire in Glasgow in 2014 and I thought I’d never have another chance to have the honour of umpiring at the Commonwealth Games.

I played in the women’s divisions of the Birmingham League in the 1960s before I moved to Worcestershire, so it’s a sort of homecoming.

It’s really good to be working with these younger umpires. We’ll have two who are 60 years younger than me, so it proves table tennis is a sport for all ages.

It’s exciting to be able to go to a home event – we’ve not had anything major in this country since the Team World Cup.

I was at that event and I’ve done European Championships, but this is my first multi-sport event and it’s a much bigger event.

I block the crowd out and it’s just Player A versus Player B and we’ve got to apply the rules the same, no matter who they are.

But, of course, it’s great to umpire the best players.

I’m a player and a coach and I wanted to do the other side of it as well as something I could continue with when I eased up on playing because I still wanted to be involved.

It will be the biggest thing I’ve done so far. It’s great to be selected, and I’m looking forward to it.

Obviously, it’s a bit nerve-wracking, but we have to stay focused and concentrate on the job in hand. Hopefully, the nerves will disappear once we get into it.

It’s just nice to be part of it and to see the players playing.

I started about eight years ago – there was the opportunity to train, and I thought I would give it a go, and I liked it and it went from there.

Over the years, I’ve done quite a few events. I went to the Island Games in Gibraltar in 2019 and it was a lot of fun and really enjoyable being in an event with a lot of noise.

I’m nervous and excited thinking about it. It’s going to be the biggest event I’ve ever done but I think once we get there, it will all feel natural again.

It will be great to see so many women there, with a 50-50 split and a female referee. We’re going to be ‘Team Women’!

As someone more mature than some of the other umpires, it’s a once-in-a-lifetime opportunity for me.

You get the best seat to watch some of the best players. You can hear and almost feel the game, you are that near to it.

Yes, we’ve got to officiate but we still watch the best players in the world from the best seat in the house.

I did local league in Scunthorpe and then I just progressed from there. And then I thought ‘I quite like this umpiring’ and went on from there.

I’m absolutely super-super pleased to be part of it and there won’t be any nerves, not at all. I enjoy it and you’ve got to enjoy what you do.