Pitchford to enter the WTT Star Contender event in Doha 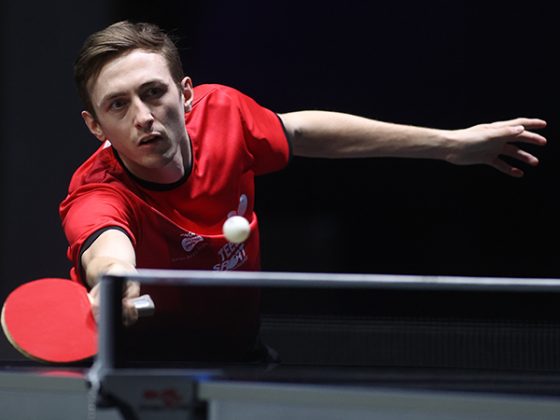 Liam Pitchford believes competing in the WTT Star Contender event in Doha is the best move for his career as he seeks to break into the world top 10 – even though it could mean he has to miss the Mark Bates Ltd Senior Nationals.

The England No 1 had been due to defend both the men’s singles and men’s doubles titles – the latter alongside Paul Drinkhall – at the event at the University of Nottingham from 25 – 27 March.

However, a World Table Tennis Star Contender tournament in Doha has now been scheduled to take place at the same time, with many of the world’s top players competing.

Pitchford intends to enter the WTT event – although as only six from the World’s Top 20 players are able to enter, there is no guarantee he will be able to compete. If Liam is not accepted into the event, he remains committed to the National Championships.

While he acknowledges that he would like to defend his national titles, Pitchford, who is currently ranked No 13 in the world, says he needs to be going head-to-head with the world’s best players if he is to move up the rankings and challenge for major international honours.

The Chesterfield man said: “My aim is to get into the top 10 in the world and win more matches and tournaments internationally.

“It’s a shame the events are on at the same time as I was looking forward to defending my titles and playing in front of a home crowd again, especially after there was no Nationals last year because of the pandemic.

“But I need to do what’s best for my career; if I want to gain ranking points and break into the top 10 in the world, I need to be at these events.

“Playing against world class players is the best decision for my growth, and I’m sure people will understand that.”

Tickets start at just £5 and there is a membership discount of 10%, as well as concessions for under-18s, over-60s and students, plus savings on family and three-day tickets.