Staging major table tennis events in England was on the agenda as a high-powered ITTF delegation visited London. 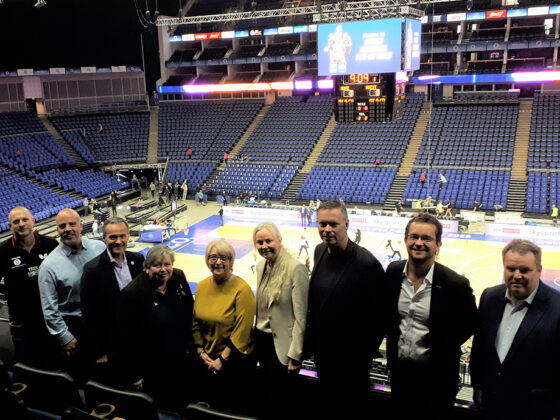 Staging major table tennis events in England was on the agenda as a high-powered ITTF delegation visited London.

The group also visited the O2 Arena, a venue with a capacity to seat 20,000 spectators, during the British Basketball League play-offs.

Table Tennis England aspires to bring world-class table tennis to this country and expose our players to elite competition on home territory, as well as engaging supporters and making the sport more visible.

Petra Sorling said of the visit: “It’s always a pleasure to visit our friends in England, I came recently for the 100-yar celebrations of Table Tennis England.

“The ITTF centenary is around the corner, and we are hoping London can play a part in that celebration, as it did in 1926 when it hosted the first ever world table tennis championships.”

Sandra Deaton said: “Table Tennis England, and our major event partner, UK Sport, were delighted to host our friends and colleagues from the ITTF in London at the weekend.

“We enjoyed fruitful discussions where we had the opportunity to share our vision for staging major events in this country, including our aspiration to be part of the ITTF’s Centenary celebrations in the city where international table tennis was born.

“I would also like to say a huge thank you to the Board of the British Basketball League for providing the opportunity to showcase the world famous O2 Arena at the fantastic finale to the basketball season.”