Gehlot and Thompson victorious at Cippenham

After a three-year Covid-related absence the Cippenham Five-by-Two Senior and Veterans’ 1-Star Open returned on Saturday. 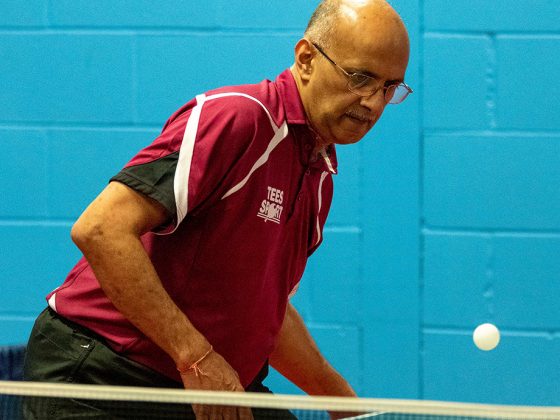 After a three-year Covid-related absence the Cippenham Five-by-Two Senior and Veterans’ 1-Star Open returned on Saturday. Despite a clash of dates with the huge London Grand Prix close by, the tournament was well subscribed with a very near capacity entry which kept the nine tables busy for more than 10 hours.

There were two events, namely the Veterans’ Singles for the over-40s in the morning and the Senior Singles, open to players of any age, in the afternoon. Most of the veterans stayed on for the afternoon event where they were joined by a sprinkling of younger players.

The 42 players in the Veterans’ Singles were organised into eight preliminary round groups in which most of the top-ranked players duly surfaced to the top of their respective groups. Of the top four, the only exception was fourth seed Jojo Senorin who was beaten by Paul Martindill, who, in turn was beaten by Stuart Vincent. After a countback, Martindill topped the group followed by Senorin and Adam Johnson, who had beaten Vincent. Seventh-ranked player Steve Davis also lost his place in his group having been beaten by both Tom Lodziak, who emerged top of the group, and Tomasz Nowakowski.

Only five of the group winners made it into the quarter-finals of the knockout draw. The first casualty was top seed Jason Thompson, beaten by the displaced Senorin while Geoff Grange fell to Nowakowski and Vadym Krevs to Radovan Zivkovic. The other five who progressed were Richard Hayes, over Julie Lawrence, Tom Lodziak over Chris Maiden, Phil Snelson over James Wright, Martindill over Michael Wilkins and second seed Hari Gehlot who beat Robert Spiegelhalter.

In the quarter-finals, Senorin continued his progress by defeating Hayes, third seed Snelson beat Lodziak, the unseeded Nowakowski ended the run of Martindill and Gehlot breezed past Zivkovic. Hari Gehlot then made short work of Nowakowski in his semi-final while Snelson took the longer route, with three deuce games including 14-12 in the fifth, to edge past Senorin. Victory in the final, which was between the second and third seeds, saw Hari Gehlot (pictured above) retain the title he won last time around, albeit three years previously.

Gehlot did not stay for the Senior Singles event in the afternoon and so Snelson moved up one place in the seedings to second. Senorin pulled out from his third seed position, leaving a gap in the seedings, and the much younger Toby Crawcour entered the fray as fourth seed. Spiegelhalter took full advantage of Senorin’s absence to win his group but otherwise it was the highest-ranked player who prevailed in the others.

This time there were no early surprises in the knockout rounds with seven of the eight group winners making their way into the quarter-finals, the exception being the elimination of Spiegelhalter by Magda Kozubek. Kozubek then beat Zivkovic to earn herself a place in the semi-final while top seed Jason Thompson took four games to oust Thamal Udamulla as did Crawcour against Vadym Krevs. Snelson took one more, at deuce in the fifth, to end the run of Nowakowski.

Wins by Thompson, over Crawcour, and Snelson, over Kozubek, resulted in the top two seeds meeting in the final. That match went the full distance of five games and was eventually won by Thompson, relegating Snelson to his second runner-up position of the day.

In the consolation events, the unfortunate Rafal Wdowczyk was also runner-up in both, beaten by Michael Stephens in the morning and Terun Desai in the afternoon.

The tournament was organised by Paul Baker and refereed by Graham Trimming.