A project led by Women and Girls Ambassador Sally Hughes has been identified for support through the Level the Table grant scheme aiming to make table tennis more welcoming for female players. 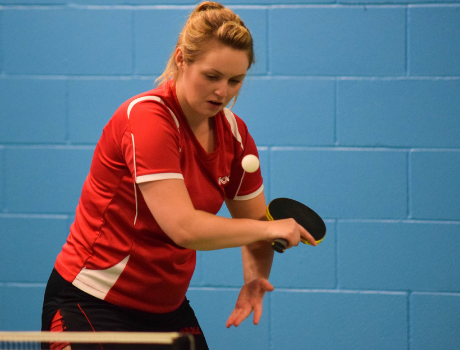 A project led by Women and Girls Ambassador Sally Hughes has been identified for support through the Level the Table grant scheme aiming to make table tennis more welcoming for female players.

Sally is a national level table tennis player and an advocate for female success in our sport. However, she is often the only female on a team or even in the venue which is not uncommon across many clubs and leagues around the country.

Between a player’s local league, Women’s British league or the Grand Prix circuit there are few opportunities to compete and even more rarely any other events that are aimed at female participation.

This sparked the idea for Sally to set up her own entry level tournament supported by the Sussex County Table Tennis Association to connect the competition ladder to give women and girls the opportunity to be competitive and remove some of the barriers other competitions pose.

The TASS research that looked into reasons for drop out in the 18-30 age group showed that senior players are put off by events that engage a lot of juniors and would much prefer to compete with women of similar ages.

Therefore, the Women and Girls 1* Tournament in Burgess Hill on the 2nd July 2022 will split the age groups to try and overcome this barrier. Under and Over 21’s events will target groups that are often forgotten in other events – those who are no longer juniors but not yet veterans.

Sally adds: “Table tennis is a fantastic sport that offers its players so many opportunities, skills and experiences. I hope that this small step will encourage as many women and girls as possible to take part in a safe, supportive and enjoyable environment”.

The end goal is for the tournaments to offer a regular competitive platform for women and girls and to upskill an all-female tournament workforce – including organisers, referees and umpires. The hope is also that this will help bridge the gap between beginners and local league players and the highest levels of national competition.