Commonwealth Games gold medallist Jack Hunter-Spivey has a memory he will treasure for ever after the medal ceremony. 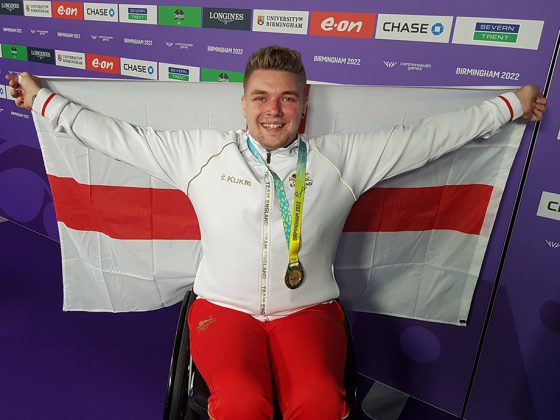 Commonwealth Games gold medallist Jack Hunter-Spivey has a memory he will treasure for ever after the medal ceremony.

Hunter-Spivey won the gold in the Men’s Class 3-5 Singles.

The Liverpudlian said: “That roar from the crowd going out for the medals and hearing Jerusalem being played – I’ll never ever forget it in my life and I’m so thankful for the position I’m in.

“The home crowd was a big motivator and it means everything to have my friends and family here. My girlfriend Lucy and I have been through thick and thin and I’m on top of the podium now and it is for both of us and everyone who has supported me – it is incredible.

“It is so hard to describe what I have just done. It feels as if the whole world just watched me win a gold medal in the Commonwealth Games.

“It is something that I have dreamed about since I was 10. It is something I have watched on the TV and thought was never possible, and now I have won it.”

“It feels so special. I grew up as a kid wanting to be Steven Gerrard. I wanted to be at Anfield. That was my Anfield, the crowd were my 12th man. It is so surreal, I want to do it all again.

“This gives me all the belief – I’m not just a table tennis player I’m a Paralympic medallist and Commonwealth Games gold medallist and I need to take that into my performance now.

“I’m looking forward to the World Championships (in Spain in November) now. I’m in a good place, I’m playing well and everything is falling into place for me so hopefully my career is on an upward path now and I can bring home some more medals.”