The brilliant Jack Hunter-Spivey powered to England’s first table tennis gold medal of the Commonwealth Games, but Fliss Pickard and Sue Bailey missed out on bronze. 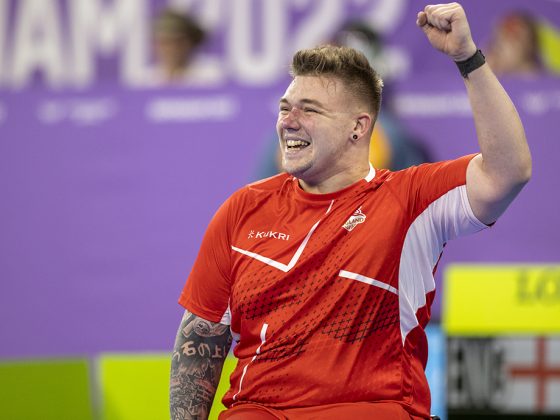 The brilliant Jack Hunter-Spivey lit up the NEC as he powered to England’s first table tennis gold medal of the Commonwealth Games tonight.

Unfortunately, further medals were not to be, with defeats in bronze medal matches for both Fliss Pickard and Sue Bailey.

Hunter-Spivey beat Nasiru Sule of Nigeria in four games to justify his top seeding in front of a rapturous crowd.

There were wonderful scenes in the mixed zone as Hunter-Spivey was greeted by tournament referee Karen Tonge OBE – briefly abandoning her strictly impartial stance to congratulate an athlete she coached in his early days in the sport.

The winner’s BBC interview was then gloriously ‘crashed’ by his mum, Renee, before Hunter-Spivey was greeted by jubilant team-mates and supporters.

The match against a 54-year-old who won a Paralympic bronze medal way back at Atlanta 96 was a chance for Hunter-Spivey to avenge his defeat in the group match between the two earlier in the tournament.

With that spurring him on, he powered through the first game 11-4, rousing the supporters with a big gesture at the end.

After that, to go 7-0 down in the second was not in the script. But Hunter-Spivey worked his way back to an 8-7 lead, using his wingspan and sharp movement to retrieve ball after ball as Sule tried to move him left then right.

His mastery of angles was also on show as he sent a couple scooting off the side of the table out of his opponent’s reach.

However, he could not turn that comeback into a game victory as his opponent took it 11-9.

Having made that fightback from 7-0 down, Hunter-Spivey would have hoped to, perhaps banked on, winning that game. His reaction – smiling as he went back to his corner and coming out to dominate the next – spoke volumes about his resilience.

He sailed through to 10-3 up, had a small blip as Sule won three on the spin, but closed it out 11-6 to move to within a game of the gold.

And it was 11-7 in the fourth as he added Commonwealth Gold to the Paralympic bronze he won in Tokyo last year.

Afterwards, Hunter-Spivey said: “I used my tactics as much as I possibly could. It is just about keeping the focus on the table.

“I am quite a positive guy, so I was looking at what I could do if I won, looking at the crowd and trying to win big points.

In the first medal match of the day, for the Women’s Class 6-10 Singles bronze, Pickard played her heart out but could not overturn the difference in classification between her and Faith Obazuaye of Nigeria.

Class 6 Pickard played with passion and intelligence and took the first game 11-6 against her Class 10 opponent.

Obazuaye, who beat Pickard in the semi-finals in Gold Coast four years ago, started getting her powerful forehands away to good effect, generating her own pace where Pickard gave her none to work with, and came back to win the next two.

A timeout taken by coach Andrew Rushton at 0-3 in the fourth sparked a revival in Pickard and she brought it back to parity at 5-5 and then led 8-7.

Had Pickard taken that game, all the pressure would have been on the Nigerian in the decider, but Obazuaye lifted herself and won four points in a row to seal the bronze.

The challenge facing a Class 6 athlete taking on a Class 10 athlete of far greater mobility was underlined by the ‘lap of honour’ taken by a delighted Obazuaye.

The crowd certainly realised Pickard’s incredible achievement in reaching the medal match and rose to give her a standing ovation as she left the court.

Pickard said: “I thought I came out strong and really gave it my all, but fair play to Faith, she really stepped it up in that second set and she’s really strong. All credit goes to Faith – I felt I kept fighting all the way through, and I’m proud of that.

“I feel that if I can go out there and get to the semi-final position as a Class 6 it is really showing the world what I am capable of and hopefully people see me as a table tennis player rather than just someone to feel sorry for.

“It’s only going to take me forward. I’ve sharpened up in a week, just being around the able-bodied (athletes) and watching loads of table tennis, so I feel this is really going to catapult me forward ready for the World Championships.”

As for the Games as a whole, Pickard added: “The experience has just been incredible, all the volunteers, the crowd, the atmosphere’s just been phenomenal. The staff working behind the scenes couldn’t have done any more for us. It’s fantastic to be part of Team England. It feels incredible to have that backing, that support. I loved the experience.”

In the final set of medal matches, a disconsolate Sue Bailey was never able to get into the match against India’s Sonalben Manubhai Patel, who took the medal courtesy of a 3-0 (11-5, 11-2, 11-3) victory.

Bailey, another Paralympic bronze medallist from Tokyo was distraught afterwards that she had not been able to show anything like her best form in Birmingham.

An inconsolable Bailey said afterwards: “I’m disappointed in my standard of play when I know I can play better than that.

“I’ve just not been able to show how well I can play, I’m a different standard to that and I couldn’t do that this week.”