It is a mixture of pride and disappointment for the England players after winning men’s team bronze at the Commonwealth Games. 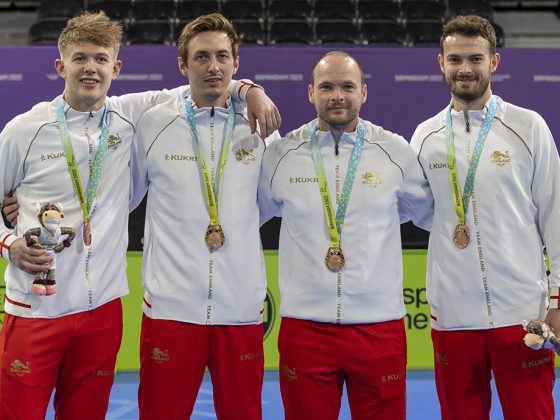 It is a mixture of pride and disappointment for the England players after winning men’s team bronze at the Commonwealth Games.

England defeated Nigeria 3-0 this morning to get on to the podium, but it was gold they really wanted – a dream which ended with semi-final defeat to Singapore yesterday. Singapore went on to win silver, losing the gold medal match 3-1 to India.

The squad did not wallow in disappointment, but came out and produced a performance of focus and flair to earn a repeat of the medal they won four years ago in Gold Coast.

For Liam Pitchford, who won his singles match against world No 15 Quadri Aruna, it was Game medal No 9 of his career, and he said: “I feel a little bit indifferent, obviously it is another medal to add to the collection.

“I’m still sore from last night, I didn’t get much sleep and I didn’t know if I would be playing today. I’m quite proud that I came out and proved, not only to myself but to everyone, that I can still play like that.

“I can beat the best players in the world, so it gives me confidence going into the singles, but it still hurts.

“I spoke to a psychologist last night and did a lot of work. I wanted to go out there and win, not for me, but for the boys.

“For Tom [Jarvis] to get his first Commonwealth medal, that gave me motivation. Everyone was behind me, I got a lot of support. I wanted to go out and prove to everyone that I am still here.”

Jarvis, reacting to that first Commonwealth Games medal of his career said: “It was really hard coming back from yesterday, I don’t think we’ve ever felt that bad as a team losing a match, but I’m just proud of the lads today.

“I’m proud of Liam for going out and taking down their No 1 and I think we can all walk away with our heads held high now.

“We just said we had to go out and enjoy it. There was a lot of stress yesterday and I think that was gone today. We went out and showed out level. We were capable of winning a gold medal, but that didn’t happen.

“We’re still over the moon to walk away with bronze. It’s still there in the back of our mind what could have been, but we’d have felt much worse coming away with a fourth place.”

Drinkhall, competing at his fifth Games, said: “I feel like I’ve been performing well recently and we just said as a team ‘let’s go for it’.

“I think yesterday we played a little bit like we were trying not to lose and being a bit more safe. Today, we put the wrongs right.

“Singapore did play a great match yesterday, but today we were very positive and it was a great team performance. I think the semi-final did fire us up a little bit.

“Yesterday, they had a great match and we didn’t so much. We took it to Nigeria today and managed to come out on top.”

Sam Walker said: “It’s bitter-sweet, really. Obviously happy to get the bronze – fourth is probably the worst position you can come.

“So, happy with that, but disappointed to have lost yesterday and that it’s not a different colour medal.

“The boys did well this morning and I was just there to support really, with the change of team – and that worked, it was a good decision from Gav (Gavin Evans, coach).

“It was a good performance from the guys and good to bounce back from yesterday.”

Coach Gavin Evans said an early to start to regroup this morning was the key.

He said: “We were very disappointed yesterday, so we needed a little bit of time to settle down, we had some dinner. Then we regrouped this morning, eight o’clock.

“We’ve got a lot of learning to do, which we’re going to take away, but I’m really pleased that the lads came out and delivered a good performance.

“We knew we had to be focused because Nigeria are a very good side. We got off to a cracking start with the doubles. Pitch then beat Aruna and it set Paul up to finishe the job. We just had to stay disciplined, we had to be together and just keep fighting for every point.”