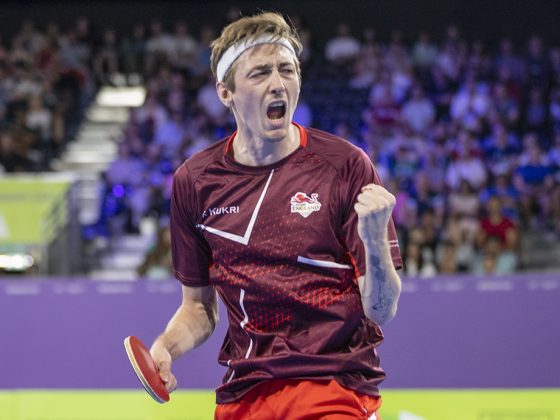 It was 3-0 and never in doubt as England lost only one game across the three matches and gained a measure of revenge for their semi-final defeat to the same opponents in 2018.

Four years ago in Gold Coast, Nigeria had stunned England in that last-four clash with a 3-2 victory, achieved without their star turn, Quadri Aruna.

This time, Aruna – the No 1 seed for the upcoming singles competition – was in the line-up, with Bode Abiodun and Olajide Omotayo remaining from Gold Coast.

England reverted to the line-up which had started the bulk of matches in Birmingham, Tom Jarvis coming in for Sam Walker and starting in the opening doubles with Paul Drinkhall against Abiodun & Omotayo.

It was a positive start too, the England pair aiming not only to set the tone for the match but also mindful of the fact that Aruna, on paper at least, ought to provide two victories for Nigeria.

That made the doubles a must-not-lose match, and the English pair never looked remotely like losing.

The common theme was powerful forehand flicks to kill rallies on the third ball, both Drinkhall and Jarvis hitting a high percentage and thereby preventing the Nigerians getting a foothold the match.

The only gathering momentum for the Africans came in the second when they close from 9-3 to 9-6, a run quickly nipped in the bud by an England timeout.

There was also a break at 10-7 in that game as one of the Nigerians was asked to re-apply tape over a sponsor’s logo on his shirt – an unwelcome distraction for England on game point. In the end, it did not matter, though one wonders what would have happened if the tape had come unstuck at match point.

The third was just as comfortable and England had the start they wanted and which they had been unable to get in yesterday’s semi-final.

Neither Pitchford nor Aruna have fired on al cylinders thus far at the Games, but in theory their clash was a dress rehearsal for the gold medal match in the singles.

It took Pitchford a few points to get going but once he unloaded a few bombs he was into his work with confidence and focus.

A fierce Aruna forehand was countered with an even fiercer response which flashed across the table and hit the floor with Aruna rooted to the spot, putting Pitchford ahead for the first time in the match at 7-6, and he never relinquished it as he took the game 11-9.

The second was cagey with a lot of let serves and a lot of returns finding the net. When the game did open out, Aruna had a slight edge, especially on his forehand.

It progressed up to 9-9 with neither holding more than a two-point advantage. Aruna injected pace into the next rally with a flashing backhand which Pitchford could not get a clean racket on, and the Nigerian closed it out next point.

Pitchford was first to show in the third, moving from 3-1 to 4-1 with a vicious backhand down the line.

The point which moved Pitchford 8-6 up was the best exchange of the match as both men ramped up the power with each shot, looking for a way through.

From 9-9, Pitchford was the first to earn a game point, swiftly cancelled out by an Aruna forehand flick to put away a loose serve.

Aruna got it all wrong with an attempted topspin forehand on the next point and this time Pitchford pounced to take the game.

At 0-3 in the fourth, Aruna took his timeout and worked his way back to 6-6, the match at times developing into a slug-fest – two Commonwealth heavyweights going toe to toe.

And then, suddenly, Pitchford landed a flurry of punches and exploded over the line with five points in a row, the NEC roaring its approval as England put one hand on the bronze medals.

Drinkhall has been England’s form player to now, so the omens were good against Omotayo, and he duly romped into an 8-1 lead, with seven points in a row, on his way to taking the first 11-4.

The second was an even bigger rout, Drinkhall barely missing a ball as he went 8-0 up with a mixture of power and delicate touch which left Omotayo devoid of ideas for how to respond. 11-2 and one game from a medal.

England now truly had their foot on Nigeria’s throat and there was no let-up as Drinkhall pulled out to 5-0 in the third. The Nigeria timeout was taken, but it was in vain. The score became 7-0 and from there it was a coast to the finish line.

A gold medal-winning performance in the wrong match, but any medal takes some winning and, after yesterday’s disappointment, it is to the players’ credit that they stepped up.