Youngsters ready to battle it out for National titles

The final national champions of the season will be crowned at the Mark Bates Ltd U11 & U13 National Championships this weekend. 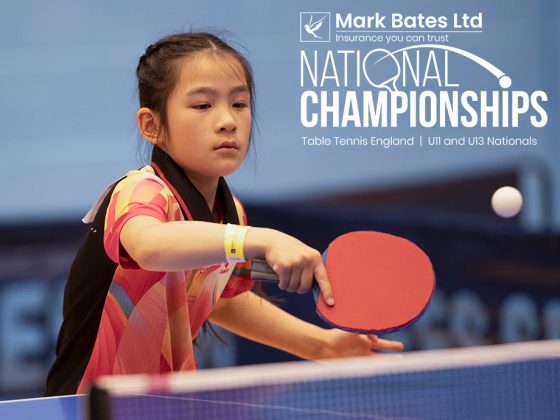 The final national champions of the season will be crowned at the Mark Bates Ltd U11 & U13 National Championships this weekend.

WV Active Wolverhampton is the venue as the rising stars of the domestic game aim to win singles and – in the under-13s – doubles honours.

The event has been reformatted since last season, when it was the U10-U13 championships and is now in line with the international competitions format.

In the boys’ events, last year’s under-10 champion Teagan Khazal is seeded third in the under-11 boys’ singles. Kacper Piwowar, a double champion at under-11s and under-12s last time, is top seed in the under-13s this time.

We will be live-streaming matches from selected tables on our Facebook page all weekend, as well as updating results as they come in – further details will be published just before the event.

For details of the seedings and schedule, download the event programme below.

The event is one of three key table tennis events across the West Midlands which are helping to build a sustained legacy of the Birmingham 2022 Commonwealth Games. The others are the Inter-Regional Finals held last month at the same venue, and the Junior National Cup at Perry Barr in Birmingham next weekend.

With the Games just 50 days away, plans to activate more communities and engage more people into our sport are really coming together. Boosted by a successful bid to Sport England and with the sport being so prominent at the Games, we’re particularly keen to ensure table tennis activation benefits a wealth of communities across the West Midlands in the lead up to, during and as part of a Games legacy.