There is a youthful look to the team news ahead of a big weekend of Senior British League, Premier Division action, with three fixtures on the calendar. 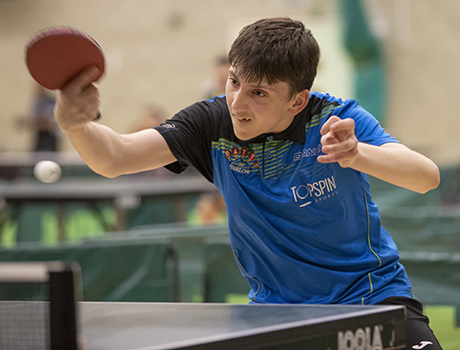 There is a youthful look to the team news ahead of a big weekend of Senior British League, Premier Division action, with three fixtures on the calendar.

Several teenagers, including a couple of debut-makers, will be in their clubs’ respective line-ups for a Saturday afternoon which could end with any of three teams topping the table.

Youngest among them is 14-year-old Ralph Pattison, the under-13 national champion (pictured above), who will make his first appearance for BATTS and features alongside the more established Jack Bennett and Ethan Walsh as they host Urban.

BATTS’ Neil Brierley said: “We’re very excited about Ralph, who lives a 10-minute walk from the club and we’re expecting a good crowd along to support him.”

Lining up against the home trio is 16-year-old debutant Felix Thomis, who is in the squad alongside fellow teenager Joe Hunter, plus Alim Hirji and Mateusz Mikosz.

Check the club Facebook page for live streaming from 2pm on Saturday.

North Ayrshire are the current leaders and host third-placed Archway – assuming storms Dudley or Eunice do not intervene in the travel arrangements.

The Scottish hosts lead the table by a point, but have played two matches more, but a win will see them retain the leadership.

Sean Doherty, Colin Dalgleish and Chris Main will be on duty and Main said: “It’s our first home match for a while, so I’m expecting a good crowd. We’ve played these lads for years and they are always good games.”

The match starts at 2pm and will be live-streamed on the North Ayrshire TTC Facebook page.

Sandwiched in between those two teams are second-placed Ormesby, who can go top if they beat Fusion and Archway also win.

Sam Mabey leads the Ormesby team, and will play alongside youngsters Thomas Rayner and David Gofton, who have been mainstays of the second team this season.

Ormesby Chairman Alan Ransome OBE said: “The team is second in the Championship and is a junior team. They’re good enough to play in the Premier Division and just need a bit of encouragement to be able to move up. We’ll see how it goes.”

Fusion, who are in fourth place, have Premier Division debutant Stephen Domingo in their line-up, alongside Lorestas Trumpauskas and Robert Pelc.

Watch the match from 2pm on the Ormesby Facebook page.