The first all-female event 1* tournament, funded by Level the Table, was so successful that another is planned for next season. 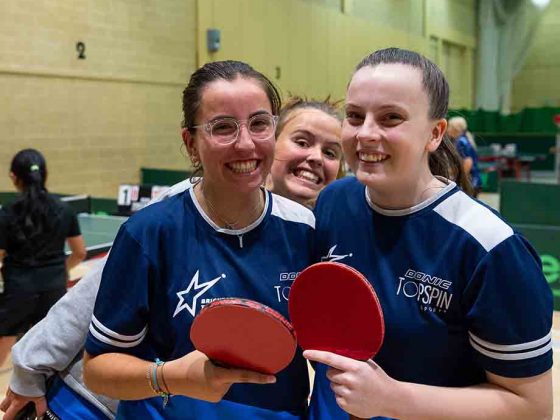 The first all-female event 1* tournament, funded by Level the Table, was so successful that another is planned for next season.

The Sussex Women and Girls 1* Summer Singles was a sellout and 60% of entries were from players not currently listed on the Table Tennis England ranking system. Also, 52% were Junior players, demonstrating the strength of players around the country looking for new events that suit them.

The event saw the biggest female entry of any singles tournament this season. The competition was always going to be a showstopper and the crowd were certainly not let down.

Click here to see the results from the day.

Click here to see photos from the day, by Stephen Pover.

As one of the players, Amanda, wrote on the Women in Table Tennis Facebook group: “I have been playing table tennis 8 months and at the weekend I won my first ever match!!!

“I arrived at the first ever all female tournament organised by Sally Hughes on my own and was feeling quite nervous as I am a wheelchair user and imagined I’d be the only wheelchair participant.

“On entering the gym I all of a sudden felt quite overwhelmed and intimidated seeing all the tables and watching all the girls and women playing and playing really well too . . . I had nothing to prove I just needed to go and do my best and enjoy myself and I did!

“I absolutely LOVED the whole experience and even got to umpire too. Everyone was so so friendly and there was a really calm and comforting feeling to the fact that we were all women . . . today was a really good day for me and a really big day for women in table tennis too.”

The Under-21s saw the first shock of the day with Anna Piercey (Buckinghamshire) overcoming fourth seed Joelle Bennett in her group to take the winners slot in the bottom half of the draw. Joelle then had an uphill challenge in the form of Mabel Shute and though she took the first set Mabel settled to take the game and secure a place in the semi-finals in four games.

Anna took advantage of the draw and progressed through to the semi-final but found Jodie Morris (Sussex) too strong and fell in three. The other semi-finalist was Emily Koester (Sussex) who battled past Yuvathi Vijay to secure her place but found Mabel Shute one step too far.

The final was nothing short of fantastic with every game going the distance but this time Jodie Morris was the winner beating Mabel Shute 3-1 (8, -8, 5, 8).

Top seed Teresa Bennett won her group comfortably but her run ended at the semi-final with a four-set defeat by Eweline Sychta of Worcestershire.

The bottom half of the draw saw the rankings play out with second and third seeds Anita Jermyn (Kent) and Dawn Baldry (Essex) play their semi-finalm which was a much more decisive three-set victory for Anita.

This set up a final show down for Anita and Ewelina. Though tight at times Ewelina showed her experience and free flowing forehand to take victory in three straight sets (7, 2, 9).

The consolation had many close games and was made up completely of new players to the tournament circuit. Ella Sach (Essex) joined Donna Hammond (Sussex) for the final showdown which Donna won confidently for a host-county win in three straight games (6, 8, 8).

The main event began with a bang with the mother-versus-daughter match up of Joelle and Teresa Bennett and they may say ‘Mother knows best’ in this case as Teresa showed how it’s done in three straight sets.

However, this led to a semi-final with Ewelina Sychta and a repeat of the morning’s action as Ewelina took the win but this time in four games, having already taken care of an in-form Anna Piercey.

The O21 consolation winner Donna Hammond had a big upset on her hands but fell at the last hurdle to Mabel Shute who then also needed four sets to make her way past Evie Knaapen. This again led to a familiar setting in a semi-final against Jodie Morris. Again Jodie came out on top in four sets to create a final game against Ewelina.

In the final, again Ewelina demonstrated why she had earned her place in the final and it took just three sets to settle who took home the silverware. Ewelina winning 11-6, 11-4, 12-10.

The open consolation had too many games to single out just one as the one to watch – Emilie Guillox (Essex) beat Ella Sach (Essex) in five long sets, Jennifer Watkins (Sussex) beat Bly Twomey (Sussex) again in five long sets and then the final between Rosie Byne (Bedfordshire) and Georgina Hunter (Sussex) took the longest of all to find a winner. Georgina eventually ran out with a 3-2 win (-9, 6, 12, -7, 9).

This tournament initiative encourages participation from female players who are entering the tournament circuit for the first time, looking to finesse their play against other like-minded players, or who haven’t been competing up until now.

The Sportswoman Award was presented to Karin Kunrath from Haywards Heath who embodied the mission of the event by winning some, losing some and loving every minute.

The next all female tournament will be held at The Triangle, Burgess Hill, Sussex, RH15 8WA
on November 5 – early entries are encouraged.

A huge thank you to all those who made this event possible – Jim Skinner (Sussex Chairman), Brett Holt (organiser), James Pettigrew (umpire), Jenny Leach and Lauren Evans at Table Tennis England and everyone who entered to make this just the first of many.

As I qualify as an organiser and take the steps towards becoming a referee I would love to help other women and girls on the journey with me. If you have ever thought – ‘what can I do to help girls in the game’ please reach out and let’s qualify together and help set up a network of female-led events around the country. Anyone interested is welcome to come and see how a tournament is run on November 5.

If you would like to get in touch with Sally Hughes, please contact Table Tennis England’s diversity inbox at [email protected].

Furthermore, if you would like to run a women and girls-only competition, Level the Table funding can help you. Applications are now open to access the funding.