Will Bayley takes gold in Slovenia

In his first international tournament since taking two silver medals at the Tokyo Paralympic Games last year Will Bayley marked his return by winning the men’s class 7 singles title at the Slovenia Para Open in Lasko on Saturday. 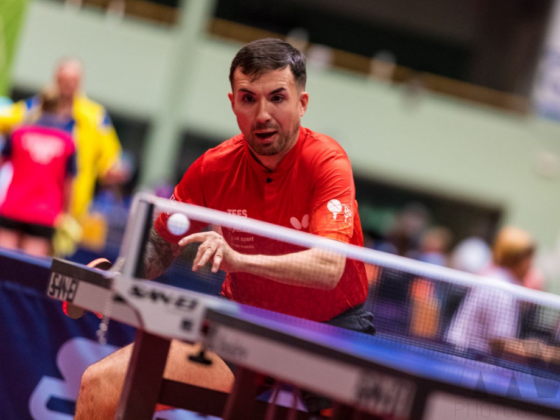 In his first international tournament since taking two silver medals at the Tokyo Paralympic Games last year Will Bayley marked his return by winning the men’s class 7 singles title at the Slovenia Para Open in Lasko on Saturday. With all the leading nations competing here apart from China this was the strongest tournament this year outside the World Championships and Fliss Pickard (women’s class 6), Tom Matthews (men’s class 1), Jack Hunter-Spivey (men’s class 5), Martin Perry (men’s class 6) and Aaron McKibbin (men’s class 8) all took bronze in their respective singles events.

Bayley has had some great battles over the years with Jordi Morales, including a five-set epic at the World Championships in 2018 that the 37-year-old Spaniard won before going on to take the title. Bayley started well in their semi-final and led 2-0 but Morales is a great competitor and took the third 11-5. Bayley then raced to a 10-4 lead in the fourth but as the match points came and went coach Greg Baker called a timeout at 10-7 and Bayley clinched the set 11-8 and the match 3-1 when Morales sent his service return long.

That took him through to the final where he faced Chalermpong Punpoo from Thailand. They last met in Tokyo, when Bayley won in three close sets, and the Asian Championships bronze medallist made a flying start to take a 7-2 lead in the first set. Bayley then won seven consecutive points and took the set 11-9 and was always in control from that point, taking the second 11-5 and the third 11-5 for a 3-0 win.

“I started pretty slowly,” admitted Bayley, “but I have to give credit to him because he started really quick and smart and I was expecting that to be honest. At 7-2 down I said to myself that his serves are coming long and I have to try and attack because otherwise he is getting on top of me. I don’t want to lose because someone is going at me and I just don’t show anything so I knew I had to try and attack. Luckily I won that set and I think that was massive momentum for me and I was solid for the rest of the match.

“I’m really happy with the way I’ve played at this tournament. It’s been tough mentally because we’ve been going from doubles to singles and doubles to singles and it is tough mentally and tiring but I’m really pleased that I held it together. Every tournament now is hard to win so I’m proud to win this tournament. It is not easy and I’m fighting and working as hard as I can so I’m really proud and I need to enjoy it and celebrate a little bit because you never know how many more tournaments you’ll win.”

The Rio Paralympic champion celebrated by holding up the shirt given to him on Friday by three-time World and Paralympic champion Jochen Wollmert after they lost in the quarter-final of the men’s doubles in what will be one of the German’s last tournaments before he retires.

“He is my hero and I wanted to win for him,” said Bayley. “I learned so much playing the doubles with him – I learnt so much about my own game and how to play tactics. He speaks to me about table tennis and he has so much knowledge and I wanted to do it in his honour today because he is the best player in history and I want everyone to remember him and know how good he was – I’m really passionate about that because he was unbelievable.”

Matthews made a slow start against World champion Kim Hyeon Uk from Korea who took the first set comfortably 11-3 but the Welshman was much more competitive after that and the next two sets were close although the World number two and Paralympic silver medallist from Korea took them both 11-8, 11-9 for a 3-0 win.

“I’m pleased I got stronger as the match went on,” said Matthews, “but you can’t give cheap sets and the first set I basically handed to him and he took advantage so that is why I’ve got to go back to the drawing board and work on some things before I meet him again. I’ll take a few things away from the match and come back stronger. I’m pretty pleased with the tournament overall – it is one of the strongest Para events in the year so I’m happy to get to the semi-finals but obviously disappointed to lose. I’ll go back to training and try and beat him again in another competition.”

Jack Hunter-Spivey took on World number two and 2014 World champion Valentin Baus in his semi-final. The two last met in Tokyo last year when the German won in three sets on his way to winning the Paralympic title but it was much closer today. Hunter-Spivey came back from 10-8 down to take the first set 12-10 but Baus levelled at 1-1 and then took the second 11-6 before winning the fourth set 11-6 and the match 3-1.

“I had a strong start but Baus is Paralympic champion and a quality player,” said Hunter-Spivey. “I didn’t feel that I had my best level today – there were some unforced errors and I didn’t carry out my tactics like I wanted to but it’s all a learning experience and a process. To get to the semi-finals of a big competition is always great and I was disappointed with the loss but I’ve got to crack on now and see what I can improve on. I’ve enjoyed this week. I’ve been able to grind out wins and I’m glad to see I’ve still got that after not competing for a while. I play table tennis to win matches and get that feeling of winning matches on big points. I’ve had that feeling this week and I need to carry that forward – hopefully to the World Championships and the Commonwealth Games as well which would be a big experience for me.”

Martin Perry had not taken a set off Rungroj Thainiyom in seven previous meetings and the World number three from Thailand took the first two sets comfortably in their semi-final today. But Perry has found a new level at this tournament and he kept himself in the match with some great play, saving two match points at 10-8 down before taking the set 12-10. From 5-1 down in the fourth he fought his way back to 7-7 but the London 2012 Paralympic champion used all his experience to move ahead again and he took the set 11-7 and the match 3-1 when Perry put his return into the net.

“That is the closest I’ve ever taken him,” said Perry. “He is a previous Paralympic champion and World number three but I felt I was in the match. He took the first set quite easily but after that I felt it was quite tight and could have gone either way. Had I just got a better start in the fourth set – from 5-1 down it went to 7-7 so I got a bit of momentum and if I had managed to clinch that set it could have been a different story. I’ve played pretty much all of the top 10 now and I feel like I can really compete with them and win which is the main thing. Obviously, I’m gutted to lose but I have proved something to myself with the tournament I’ve had and the matches I’ve come through that have been tight and that is something that builds character and experience that I can use going forward. It’s been a good tournament for me and a lot of positives – the only negative was I didn’t make the final.”

In his semi-final Aaron McKibbin came up against World number two Viktor Didukh from Ukraine for the first time since Tokyo when he had pushed the four-time European champion despite a 3-1 loss. The pair have had some close matches in the past but Didukh held a 16-0 win/loss record against the 30-year-old Londoner and he was at his ruthless best today to win in straight sets.

“It was tough,” said McKibbin. “He’s a very good player and very smart and I couldn’t find my rhythm against him to be honest. I was really confident going into it because in Tokyo I pushed him really hard and I fancied my chances based on how the tournament has gone so far but it was one of those days against him. He’s a top player and he doesn’t give you many opportunities – you’ve got to work for everything and if you struggle to find your rhythm it’s always going to be difficult against him. I’m happy to get to the semis and it is probably the strongest tournament of the year apart from the World Championships so I’m very happy going into the next tournament in Montenegro that I can keep this up. This is the confidence boost I needed because I am number five in the world but I’ve not really been in big games at the stages that I should be for my ranking so it is nice to reach that level. A good two weeks training in England now then on to Montenegro and hopefully I can repeat it there.”

After some great performances this week Fliss Pickard could not produce her best level against the World and Paralympic bronze medallist Stephanie Grebe and although she fought hard the German World number four always just had the edge in a 3-0 win.

“I was very disappointed with my performance,” said Pickard. “I felt that I let her get on top and dictate the game but again it is just another learning experience and I’ll get stronger for next time. I’m definitely getting closer to the top players and I’ve made progress this tournament although I don’t feel I’ve shown the level yet but I think that will come with confidence. If I keep playing tournaments and keep playing matches I believe the level will come.”

The full list of British athletes competing in Slovenia is: