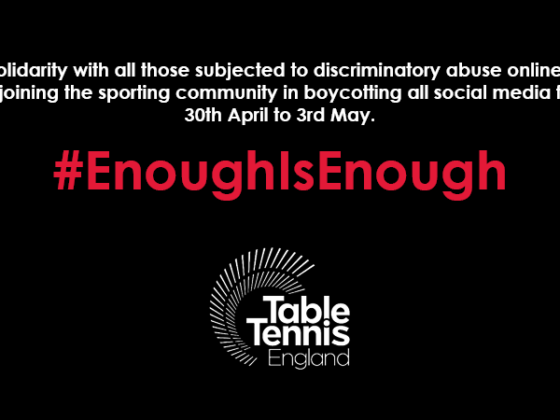 Table Tennis England and members of the England squads are standing in solidarity with victims of online abuse by joining the #EnoughIsEnough social media boycott this weekend.

From 3pm on Friday to 11.59pm on Monday, there will be no activity on the Table Tennis England social media channels.

The #EnoughIsEnough campaign was initiated by the football community in response to repeated online abuse of footballers and officials.

The campaign has now transcended the football community and organisations and individuals from across the sporting galaxy have united, including Team GB, the Sport and Recreation Alliance, sports National Governing Bodies and media organisations including Sky Sports, BT Sport and talkSPORT.

Table Tennis England stands with the sporting community to state clearly that online abuse, whether based on race, gender, sexuality or anything else, is unacceptable. We join the call for the social media companies to do more to eradicate online hate.