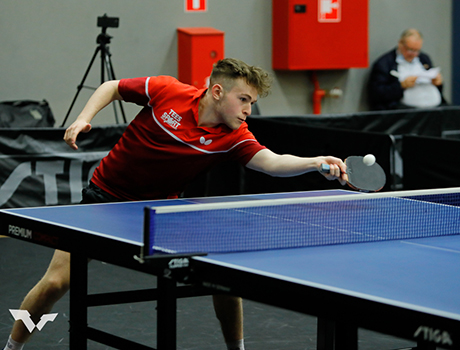 The Doug Ellis Sports Centre in Perry Barr is the venue, and we will be live streaming selected matches on our Facebook page as part of our project to build a sustained legacy from Birmingham 2022.

Bristol left-hander Price (pictured above), who won the trophy at an event played under covid protocols in 2021, is the top seed in the competition which sees 10 players in each gender category play each other in a round-robin format to decide the medals.

Although some players have not accepted their places due to school exams, the field is still strong as eight leading Juniors and two invited Cadet players line up in each category.

Price will face a challenge from the likes of GB development player Ben Piggott and from Cadet Larry Trumpauskas, who so far this season has won the Cadet National Cup and both the Cadet and Junior Boy’s Singles titles at the Mark Bates Ltd National Championships.

Last year’s champion girl was Mollie Patterson, who was earlier this month named in the England team for the Commonwealth Games. Patterson is no longer in the Junior ranks, so Jasmin Wong is the top seed. Also in the field are Under-17 Girls’ Singles national champion Megan Jones and the two invited Cadet players, Bethany Ellis and the recently-crowned Under-13 Girls’ Singles national champion Sienna Jetha.

For details of the schedule, please download the programme below.

* With the Games just over 40 days away, plans to activate more communities and engage more people into our sport are really coming together. Boosted by a successful bid to Sport England and with the sport being so prominent at the Games, we’re particularly keen to ensure table tennis activation benefits a wealth of communities across the West Midlands in the lead up to, during and as part of a Games legacy.

The Junior National Cup is one of three key table tennis events across the West Midlands which are helping to build a sustained legacy of the Games. The others were the Inter-Regional Finals and the Mark Bates Ltd U11 & U13 National Championships, both held at WV Active Wolverhampton during the last few weeks.