Walker and Bardsley bow out of singles 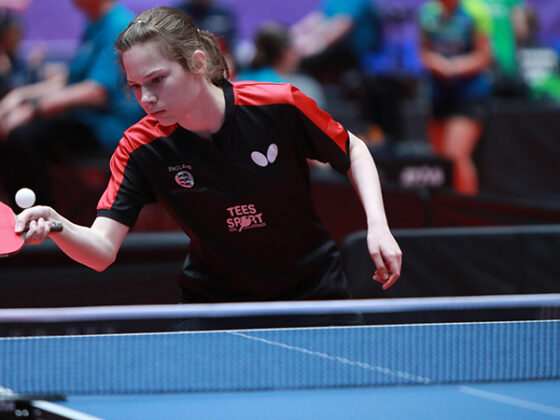 Sam Walker and Charlotte Bardsley were both eliminated from their respective singles at the European Championships in Warsaw today – but both still have the doubles to aim for.

Walker, who finished second in his group yesterday, went into the qualification rounds to earn a place in the main draw, and he advanced through the first of those with a four-game victory over Eric Glod of Luxembourg (WR 210).

He next faced Tobias Rasmussen of Denmark, a player he knows well having partnered him to the Men’s Doubles quarter-finals of these championships in 2018 – the first English player to have reached that stage since 1990.

Walker is through to the main draw of the doubles, however, as he and partner Filip Zeljko of Croatia defeated Michael Tauber & Yonatan Shusterman of Israel in three straight.

In the Women’s Singles, Bardsley had chances in her third and final group match, against the second-ranked player in the group, Bernadett Balint of Hungary. The tie was effectively a winner-take-all match to see who would qualify behind the top player in the group, Katarzyna Grzybowska-Franc.

Thereafter it proved too much for the Englishwoman to turn around and she lost the third and final game 11-3.

Meanwhile, Wales’ Anna Hursey, the youngest competitor in the field, reached the main draw as she topped her qualifying group thanks to a 3-1 (11-7, 11-7, 8-11, 11-6) victory over Prithika Pavade of France – her second win over a higher-ranked opponent.

Tin-Tin Ho starts her singles campaign against Ana Tofant of Slovenia in the round of 64 at 3.10pm on table 7, while Paul Drinkhall is on at the same stage of the Men’s Singles at 5.10pm against Adam Szudi of Hungary on table 6. Neither match will be live-streamed.