England’s Commonwealth Games women’s team medal dream was ended by Wales tonight as England could not find the levels of their previous match against Nigeria this morning. 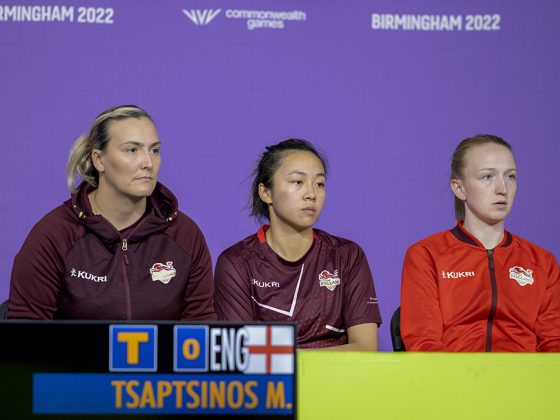 England’s Commonwealth Games women’s team medal dream was ended by Wales tonight as England could not find the levels of their previous match against Nigeria this morning.

It was a 3-0 defeat in which Wales were consistently better than their opponents, particularly in the key moments, and were rewarded with a semi-final place and the chance to go for a medal.

Such was the delay caused by the over-running Malaysia-India quarter-final that the Singapore versus Guyana match, which started at the same time as England were due on, was completed before England set foot on court.

When they did finally take the field of play, they knew that it was Malaysia who awaited in the semi-finals after they overcame defending champions India in the fifth set of the fifth match.

Wales started with a statement as Anna Hursey dismissively flicked Charlotte Bardsley’s serve for a receive winner on the first point of the opening doubles.

They had four points on the board before England replied and the Welsh pair of Hursey & Chloe Thomas Wu Zhang quickly ran away with it 11-3.

Bardsley & Maria Tsaptsinos just didn’t get going in that game, but they found their groove in the second, levelling up with an 11-5 margin.

The third was tight but appeared to have turned on the 12th point when some brilliant defensive work by the English duo forced a mistake from Hursey. That made it 6-6 and England won the next three points – only for Wales to hit back and win the next five to move back in front.

It was more of the same in the fourth, neither pair able to dominate, but Tsaptsinos’ amazing reactions to return a Thomas smash had her dancing around the court whipping up the crowd. That made it 8-8 but England could not grab the initiative and Bardsley went long with a forehand on Wales’ first match point three points later.

The match between the two countries’ respective No 1s, Tin-Tin Ho and Charlotte Carey, promised much and certainly lived up to its billing.

The first saw Carey close from 9-6 to 9-9 and then save two game points, before missing one of her own as both women battled to get that all-important first game. In the end, it was Carey who took it 14-12 on her second game point.

Ho always had her nose in front in the second, which she took 11-6, and carried that into the first part of the next game, winning the first three points. And then the tide turned again, Carey taking 11 of the next 13 move back in front.

That became four of the opening five points in game four, prompting Ho to take her timeout. It arrested the reverse momentum for a few points, but Carey was not going anywhere and a long Ho push led to four match points. Only one was needed, Ho clipping the net and going long and it left England contemplating the Welsh mountain in front of them.

It was Tsaptsinos’ task to start the long climb ahead, against Hursey, but she started on the wrong foot, Hursey winning six successive points in the middle of the game and then completing it with a well-directed backhand block down the line – 11-8 the score.

The climb became more Alpine than Brecon Beacon as Hursey took the next 11-9 after Tsaptsinos had fought back from 9-6 down to level. Hursey’s swinging final forehand, which had her opponent stretching in vain to reach it, was rather a metaphor for the match slipping out of England’s grasp.

It did not take long for Hursey to finally put it out of reach, an increasingly emphatic 11-4 third game ending England’s hopes of a repeat of the bronze medal from 2018.

After the match, Ho said the earlier exertions against Nigeria had not an any impact on this match.

The England No 1 said: “We can’t think about it like that. We had a rest, were ready for the match but it didn’t go our way.

“It just wasn’t our day. We fought hard but it wasn’t good enough today. I think we wanted it equally and we fought all the way until the end, there was nothing more we could have done.”

Bardsley added: “Obviously, it’s a disappointing loss, but I’m proud of the team because we fought really hard. We couldn’t ask for more from anyone and we all tried our best.

“We tried to build on the match against Nigeria and it didn’t work out in the end.

“We need to be able to reset. There are new opportunities in the future competitions. As a group we have put in some good performances.”

Tsaptsinos’ verdict was: “It was very difficult, we probably had the hardest draw of the Commonwealth Games but well played to Wales, they played really well and got through their group first.

“We had the hardest group, coming in as 12th seeds after winning bronze in 2018.

“We had the No1 seeds in our group and then Nigeria who were probably the hardest of the other lot to beat and we put it all out against them this morning.”