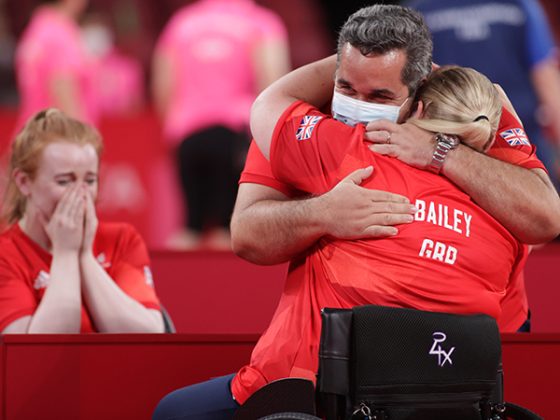 Reflecting on the most successful Paralympic Games in the modern era for the Paralympics GB table tennis team with seven medals, Performance Director Gorazd Vecko admitted that the health of his team had been more of a priority coming into Tokyo than the results.

“It has been an amazing Games for us and it feels incredible to leave Japan with seven medals,” he said. “Megan Shackleton, Tom Matthews and Billy Shilton all took medals in their first Games and we had two athletes in Sue Bailey and Paul Karabardak who have been to six and four Games respectively and took medals here for the first time.

“Because of the Covid situation we could not prepare the way we would have wanted to and there were no tournaments for 15 months for any of the performance athletes, so we didn’t know what to expect here which was really the biggest challenge in one sense.

“The last was the most important and everyone is going home today well and healthy and with seven medals and I am really happy.

“If you see the pictures of the team supporting each other they say more than 1,000 words about what was happening in Tokyo and of this I am even more proud. The biggest success for me was the team coming together as never before to support and respect each other and to be honest this means the most.”

The team won two gold medals in Rio and with Rob Davies unable to compete in Tokyo due to injury the other defending champion, Will Bayley, came into the tournament having not competed since the European Championships in 2019 and after a long battle to recover from a serious knee injury. His achievement in taking silver medals in singles and team is nothing short of remarkable.

“It is an amazing achievement for him,” agreed Vecko. “He is a special player and he is totally dedicated to table tennis. After his final team match he texted me to say, ‘I’m even more motivated for Paris now – can we start to practise tomorrow because I want to get my gold medal back in Paris’.

“I have promised him that I will do whatever is in my power to help him to be ready for Paris to regain his gold medal in the singles and maybe even take the gold in the team event as well.

“Will did not play for a year after his injury and he is an athlete who needs to play a lot of tournaments to get ready for the major championships. We were really happy to have him here.

“If Tokyo had gone ahead last year he would not have been here and I need to give huge credit to our medical staff, physios and everyone who has done a great job to get him here. That he could perform at this level and take two silver medals is an amazing achievement for the programme and for Will.”

Paris is just three years away but the next target for Vecko and his team is the World Championships next year.

“The results we have had in Tokyo give us confidence that we are on the right path,” said Vecko, “and we can look forward to the World Championships. We have some things we need to work on but the team will be ready.

“There are players who did not qualify for Tokyo who we are expecting to qualify for the World Championships and to have an even bigger team there. The planning for Paris began before Tokyo. We know what we need to do and how we can produce even better performances and I am confident that we will have more young athletes joining us in Paris in 2024.”

Day two: China too strong as GB trio have to settle for bronze | Bayley and Karabardak win thriller to reach final

Day one: Wilson and McKibbin get wins on the board | Bayley starts defence with victory

Day two: Hunter-Spivey and Matthews impress | Trio through to quarter-finals