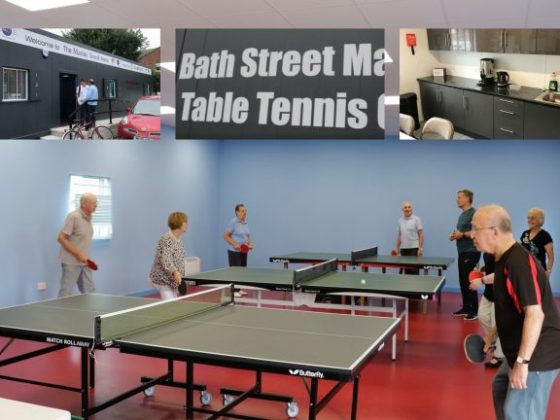 When Kevin McCloud recently nominated his favourite Grand Design of the 20 year series, who would have thought it would be made out of shipping containers. Just north of Liverpool in Crosby is a club that recently opened a new purpose-built table tennis facility based on a similar concept, with 3 tables available 24 hours a day, 7 days a week. All for a build cost of just £86k.

Bath Street Marine Table Tennis Club are based in the grounds of FC Marine Football Club. In 2005 they moved into a small cramped wooden building that could hold one table tennis table. The club had 6 teams and 40 members. In recent years the club’s membership has grown to over 90, particularly with social members, including 30 women and 10 juniors, with 8 teams playing in the Liverpool league.

FC Marine decided to demolish the existing wooden building, and after a chance discussion with one of their members linked to Eagle Containers in Liverpool, an idea was sown to build a Table Tennis facility out of shipping containers. After looking at the relatively low build costs the Club Secretary, Graham Turner and club committee members started raising funds to build the facility.

The football club offered a small plot of land (appx 16m x 8m) to rent on a 20 year lease. They then approached Sefton Borough Council’s Sports Development Unit, who helped them apply to Sport England for £57k through the Community Asset Fund. The Council also offered £10k towards the project to help expand the use of the facility and create links with other community groups. The club set about raising funds from local commercial companies and club social events to fund the remaining cost of the project, advice was sought from Table Tennis England re technical specifications for lighting, flooring, wall colour and ancillary facilities.

In November 2018, on hearing their Sport England bid was successful, the club was good to go. The build started in earnest in May 2019 and was officially opened by Sandra Deaton, TT England Chairman on 30 August 2019.

The building is a marvellous example of what can be achieved with the vision and support of a great team of dedicated volunteers. The quality of the finish is excellent, and a great model for a small to medium sized club looking to develop their own facility. For a club to build a facility available 24/7, which hosts daily open social sessions through to Liverpool league matches, for under £86k is outstanding and a great benefit to table tennis in Merseyside.