Two titles for London Academy as top schools are decided

Seven schools shared the honours at the Butterfly Schools Team Championships in Wolverhampton on a day which saw the first champions crowned since 2020. 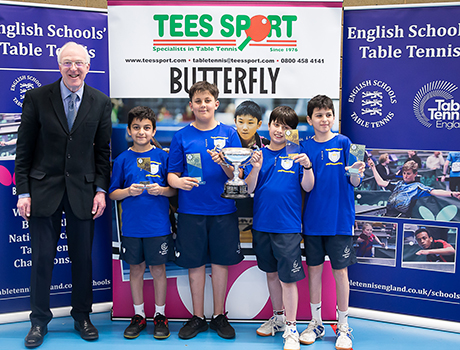 Seven schools shared the honours at the Butterfly Schools Team Championships in Wolverhampton on a day which saw the first champions crowned since 2020.

St Edward’s Catholic Primary School from Westminster defended the title they won just before the pandemic restrictions kicked in, while London Academy won two trophies as the top four teams played across boys’ and girls’ categories in U11, U13, U16 and U19 age groups.

There was also a special presentation to Richard Hudson, Deputy Chair of Table Tennis England’s Schools Committee, who is retiring after 19 years organising the event.

Photos by Alan Man – view more on our Flickr page.

They were never behind against Fox, leading 2-0 and, after Sophie Howe reduced the arrears, winning the next three to take an unassailable lead, Courtney’s  3-0 (10-12, 11-13, 6-11) win over Howe clinching that all-important fifth match win.

Both schools defeated Burbage Junior from Hinckley and Bankfields Primary from Middlesbrough. Burbage took third place with a 6-2 scoreline against Bankfields.

For the winners, Ava Baker said: “It’s really spectacular because we went all the way from winning the first competition to winning the nationals. It feels crazy and we never really expected it but it feels cool and we’re really happy.

“We were all really supportive of our team-mates and definitely our coaches Mr Loczy and Mr Lewis helped a lot. They helped us train and learn how to play properly.”

St Edward’s Catholic Primary School from Westminster successfully defended their title and in great style as they picked up 8-0 wins over St Peter’s CofE Primary Academy and Bankfields Primary, and a 7-1 scoreline against St Luke’s Primary.

St Luke’s, from Brighton, won their other two matches to take second place, while St Peter’s, from East Bridgford in Nottinghamshire were third thanks to a victory over Middlesbrough School Bankfields.

Parsia said: “In the final match I felt very worried because the other team was very good, but the support helped us to win and it feels good to be champions in our last competition at primary school.

With individual champion Jetha as the spearhead, London Academy defeated Bradford Grammar and Newcastle Under Lyme 8-0 and Putney High School 7-1.

Putney won their other two matches 8-0 to seal the silver medals and third went to Bradford, who defeated Newcastle 6-2.

That match featured some eye-catching scorelines, including a remarkable match between Ellie Stitson (Bradford) and Cecilia Clay (Newcastle). Clay led the opening game 10-2 but Stitson clawed her way back to 10-10 and the girls traded points all the way up to 22-20 as Stitson took the game and went on to win the match 22-20, 14-12, 11-7. There was also a 20-18 set in the match which saw Bradford’s Liberty Preston defeat Isabelle Heath 3-1.

For the winners, Tadeea Aparaschivei said: “We were confident at the start and there were people there to help us and encourage us. We want to thank everyone who was encouraging us when we needed it.”

Devonport High School for Boys from Plymouth were the dominant force in the T Austin Harrison Cup as they won all three matches.

They defeated Wade Deacon High from Widnes 8-0 and both Reading School and Altrincham Grammar School for Boys 6-2.

Hugo Nguyen said: “I feel extraordinary and very rewarded about winning. We were quite nervous at the start and we kept fighting and started playing better.”

It was an 8-0 scoreline against St Mary’s College from Hull, 7-1 against Wade Deacon High School from Widnes and, crucially, 5-2 over Addey and Stanhope School from Lewisham.

That match had been locked at 2-2, with St George’s having twice been behind, but they powered through the second half to take an unassailable 5-2 lead when the match was halted.

Jonabel Taguibao said: “We were the underdogs and no one thought we would win. We only got to the regional stage last year and now we are national champions.

“A big shout out to our coach Dan Basterfield and to St Edward’s School who won the under-11s and they were really supporting us.

“It feels amazing and out of this world to win.”

The most competitive category saw Wallington County Grammar School from Sutton take the plaudits and the Leach-Carrington Cup.

With three matches in the competition ending in 4-4 draws, and two as 5-3 victories, the outcome was in the balance until the end.

But it was Wallington who emerged at the head of the field, thanks to a 5-3 win over Torquay Academy, a 6-2 scoreline against St Mary’s Academy from Hull and a 4-4 draw with Charles Read Academy from Lincolnshire.

St Mary’s and Charles Read drew 4-4, ending with two draws apiece, so it came down to points in the match between the two, Charles Read taking third by a margin of 209-203.

Chidumebi Egbeama said: “At times it was a bit stressful but we got reassured by our team-mates and were able to pull through. It was a really good environment which encouraged you to not give up and keep playing. It’s a great experience.”

Wallington won their other two matches 3-2 to take silver, and third place went to Ackworth thanks to their 3-2 win over Prince Henry’s

Jasmin Coker said: “It’s very nice to win something. I was a good competition, very enjoyable.

“Every team had a chance but we were optimistic at the start and although there are times you think you’re not going to do it, you just have to carry on.”

London Academy picked up matching 7-1 victories over all three opponents to win the Norman Cook Cup.

In second place were St Mary’s School from Hull, who beat University College School, from Hampstead, 5-3 and drew 4-4 with Grantham College. UCS were third, having beaten Grantham 6-2

Daniel Oluwamayowa said: “We’re ecstatic – we’ve won the under-19 nationals and nothing could make me feel so happy.

“It was all about teamwork. We expected to have some tough challenges but we came out on top.

“Devan didn’t play much but if he hadn’t been there to support us, we wouldn’t have won.”