Trio ready to play their part in Smash launch

Liam Pitchford, Sam Walker and umpire Tom Purcell are the English representatives as a new era of international table tennis gets under way today with the start of the WTT Singapore Smash. 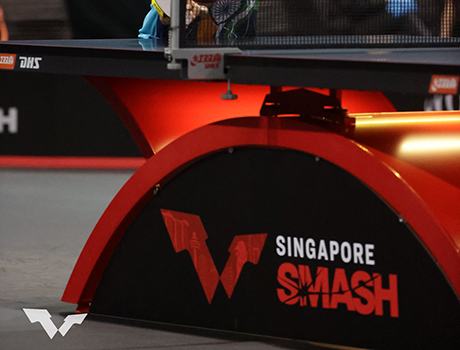 Liam Pitchford, Sam Walker and umpire Tom Purcell are the English representatives as a new era of international table tennis gets under way today with the start of the WTT Singapore Smash.

The event is the first Grand Smash competition, the new top tier of the WTT. They were due to launch last year but were pushed back by the pandemic and it is intended to hold four per year – though Singapore is so far the only one scheduled.

Walker is the first into action and will face Iran’s Amir Hossein Hodaei (WR 152) in the second qualifying round after Hodaei beat Belgium’s Robin Devos today.

The world No 86 said: “I think it’s a good event for table tennis in general, it can only really be positive. There’s more prizemoney, the best players in the world are playing.

“These events are going to be the best ones but they are obviously only for the top players and you have to be a certain level of ranking to play.

“So, I think there need to be more of the lower tournaments so the lower players have the possibility to eventually get into these big tournaments, otherwise it’s very difficult for players outside the top 50 or 60 in the world to move up the rankings.

“It’s a good opportunity for me to hopefully win some good matches and try to get a run of good performances and collect those ranking points to try and move up in the world rankings. Ultimately for me, that’s my aim, trying to get up to that top 50 in the world.

“The prizemoney is quite good and that’s important for me. The more matches I win, the more prizemoney I get, which goes to pay for me to play more tournaments.”

Walker was in good form around the turn of the year, reaching the quarter-finals and semi-finals at two WTT Feeder events in Dusseldorf, as well as a doubles final alongside Tom Jarvis.

He added: “My international season has gone okay, in the two Contender events in Dusseldorf it was pretty good, so hopefully just trying to build on that and try to get some good performances in Singapore.”

Pitchford is seeded into the main draw of the competition, starting on Friday, and goes in having made a good recovery from the knee injury which has kept him sidelined in recent weeks.

The world No 15 saw his consultant last week and said: “He was really happy with it – there’s no more fluid around my knee, he he’s happy for me to start now. Obviously, I’ve got to keep up my rehab too.

“It’s not been ideal preparation, but at the end of the day it’s an opportunity to go and play and at one point I didn’t know if I was going to be able to.

“I’ve got a few more days before I play, so there’s an opportunity to sharpen up. I’m trying not to expect too much because of the preparation, but I can go out there with no pressure and nothing to lose.”

Pitchford also agrees that the Smash series will be good for the sport in the long run, adding: “Table tennis needs to get out there more, with more prizemoney and with more opportunity to be on TV and hopefully this kind of events can do that.

“It’s early days and people shouldn’t expect too much straight away, but it’s a big event and I’m looking forward to playing in it.”

Tom Purcell, who umpired the 2012 Olympics men’s singles final in London, is one of the elite umpires selected for the event and will officiate in the main draw.

Tom is a Blue Badge Umpire, the highest standard in the world. He said: “It’s an honour to be selected for the first one. It will be a busy few days but I’m really looking forward to it and it will be good to see the best players in the world.

“Every umpire is nervous for the first couple of games, and every match will be live on the WTT website, so any mistakes will get picked up!

“I’ve been practising with the iPad scoring system and reading up and refreshing my memory about the rules – some of the rules are slightly different at the WTT, so you have to know what you’re doing is right.

“The Hungarian Open in February 2020 was the last major tournament I did, so I needed to make sure I was up to date.”

Tom will also be assessed for the new Gold Badge standard, which will sit above Blue Badge as the top level of umpiring in the world. Assessments are carried out by the refereeing team at tournaments, rather than individual assessors as in the past.