England followed up a 3-0 opening defeat by top seeds Singapore with a quickfire 3-0 win over St Vincent & The Grenadines at the Commonwealth Games today, to set up a women’s team group stage decider against Nigeria tomorrow. 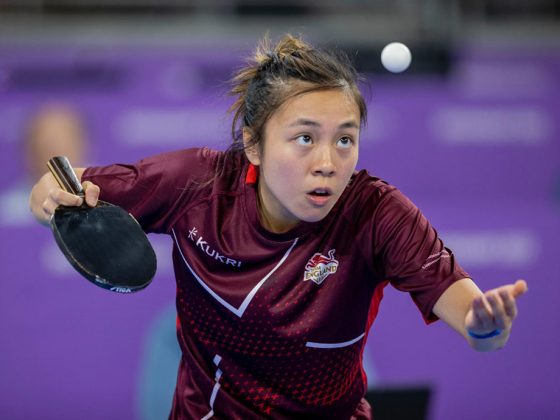 England followed up a 3-0 opening defeat by top seeds Singapore with a quickfire 3-0 win over St Vincent & The Grenadines at the Commonwealth Games today, to set up a women’s team group stage decider against Nigeria tomorrow.

The victory was as easy as it gets – the team conceding only 13 points across nine games in a match which illustrated the romance of these Games but also underlined the possibility for mis-matches.

Tin-Tin Ho (pictured above, photo by Michael Loveder) was particularly swift in dealing with Jessica McCarter, the longest rally in the match lasting only four shots as she won 1, 1, 2.

Maria Tsaptsinos & Charlotte Bardsley had opened up with a 2, 1, 1 doubles win over Leah Cumberbatch & Unica Velox, and Tsaptsinos completed the rout against Velox by a margin of 3, 1, 1 – one 18-shot rally the only one to get into double figures in the whole tie.

So it comes down to tomorrow’s 9.30am match against Nigeria – who also beat St Vincent 3-0 and lost to Singapore by the same score. The winner goes through to the quarter-finals.

Earlier, Singapore put in a powerhouse performance worthy of top seeds as England had a tough start to the competition.

The opening doubles saw Tsaptsinos & Bardsley up against Zhou Jingyi & Zeng Jian and the Singapore duo started quicker, opening up a 5-1 lead.

Their speed of movement, particularly by the long-legged Zhou, allied to canny placement, meant the England pair found it hard to work as many openings as their opponents.

There were some notable highlights, Tsaptsinos hitting a memorable backhand down the line and a great counter-attacking forehand from a defensive position a long way from the table.

But the Singaporeans always had enough game management skills to keep England at arm’s length as they won the first two 11-5.

The third saw England in the game for much longer as Bardsley, making her multi-sport debut, grew in confidence, evidenced by a brilliant cross court forehand to put England 4-3 ahead, followed by the deftest of backhands into the corner to make it 5-3.

England took their timeout at 8-7 down and won the next two points, but Singapore were not to be denied and brought up a match point with a scarcely believable forehand winner plucked almost off the floor out wide by Zhou. When Tsaptsinos drifted a return long on the next point, it was all over.

The challenge got no easier as Ho entered the fray against world No 16 and highest-ranked Commonwealth player, Feng Tianwei.

The English player started brilliantly, though, an aggressive game-plan seeing her open up a lead in the first and eventually secure three game points. She needed them all, winning it 11-9 as Feng clipped the net and went long.

Ho’s aggressive intent continued, though Feng began to find her range and particularly her power-game, using Ho’s own power against her and forcing errors. And 11-4 score sae the match tied up.

It was similar in a third game characterised by some high-tempo duels up close to the table. By no means all of them went Feng’s way, but enough did to result in an 11-7 margin.

After losing the first three points of game four, Ho called for a timeout. Sadly for her, it did not have the desired effect as Feng was by now really ticking and Ho could not consistently withstand the power from the other end of the table and it finished 11-2.

Tsaptsinos versus Zeng was No 60 versus No 313 in the world rankings and the difference was clear in the first, which went 11-2 to the Singaporean as Tsaptsinos struggled for a foothold as her opponent moved her around.

The second was better, though from a close scoreline at the midpoint, Zeng pulled away to win it 11-6.

Tsaptsinos fought hard – she always does – and forced a timeout by closing from 9-6 to 9-7. However, the nous and power of Zeng proved too much and she closed out victory for the silver medallists from 2018.