The big guns are lined up and ready to do battle on Finals Day at the Mark Bates Ltd National Championships after an exciting day today. 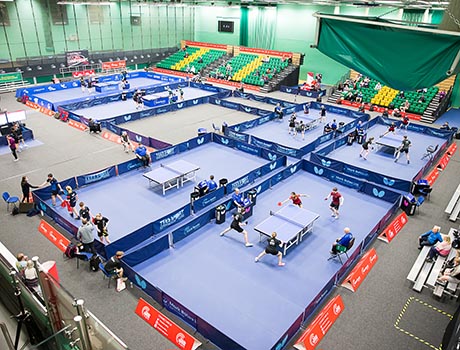 The big guns are lined up and ready to do battle on Finals Day at the Mark Bates Ltd National Championships after an exciting day today.

With places in the Men’s and Women’s Singles semi-finals and the two doubles finals at stake, there was plenty of quality action before the cream rose to the top and the leading four seeds – with one exception – made it through.

Remember, you can watch the action live on Sunday on the BBC Sport website and iPlayer.

Click here to visit the event home page for full details of the tournament. Click here for all the draws and results

Top seed Sam Walker will play fourth-ranked Andrew Baggaley and second seed Tom Jarvis will face third seed David McBeath tomorrow – no surprises there, though there were one or two earlier in the competition as Darius Knight and Sam Mabey were dumped out in the last 16.

Baggaley, playing his first nationals since 2014, set up a semi-final with Walker with a comprehensive win over Gabriel Achampong. Baggaley was in fine form and gave his opponent no opportunity to settle. He had too much quality for Achampong, winning 4-0 (11-4, 11-1, 11-6, 11-8).

Walker’s supreme form saw him beat Louis Price without breaking much of a sweat. The left-handed Price was able to roll out some of his famous forehand drives, but they came back with interest as Walker won it 4-0 (11-2, 11-7, 11-7, 11-8).

McBeath overcame a tougher test to reach the semi-final, holding off the promising Connor Green. McBeath took the first set comfortably, then added a closer second, but Green reduced the deficit in game three. Despite that setback, McBeath was able to maintain his form to progress 11-3, 11-9, 7-11, 11-5, 11-9.

The pick of the round of 16 was the epic seven set clash between Darius Knight and Siraj. It was a thoroughly entertaining match which kept the crowd transfixed on every point. The first four sets were split between them, with lots of forehand rallies away from the table.

Walker began his quest for a first men’s singles title with a 4-1 win over Joe Ferguson. Walker eased to the opening two sets, but Ferguson didn’t want to go down without a fight. The 20-year-old took the third set to make Walker work a little harder. However, the top seed then accelerated through the gears to reach the quarter-final 4-1 (11-5, 11-8, 9-11, 11-6, 11-5).

The top three seeds are safely through to finals day, but fourth seed Emily Bolton was on the receiving end of a minor upset at the hands of Charlotte Bardsley, ranked only one place below her

Bardsley’s opponent tomorrow will be second seed Maria Tsaptsinos, who also lost the first and won the next four against sixth seed Mollie Patterson. It was generally very close and Tsaptsinos had to call on her reserves of durability and experience to see her over the line – her shout of triumph at the end may have contained a hint of relief as well as delight.

The top half of the draw sees Tin-Tin Ho, the top seed, take on Denise Payet, who also both won in five.

Ho’s match was an interesting one, against seventh seed Mari Baldwin, who made the final as a 15-year-old two years ago, the last time the tournament was held.

There were no problems at all for the top 8 seeds in the last 16 – in fact, they barely dropped a game between them as six were decided in four straight and the other two in five.

Unlike in the under-21s, where she had to save a match point and was taken to a decider, Bardsley had no issues getting past Jasmin Wong (4, 3, 9, 8), while Bolton was in similar form against Erin Green, winning that won 7, 8, 6 ,4.

Ho was even more imperious against Saskia Key, dropping only 14 points against an opponent who had come through from third-ranked in her group to play the biggest match of her career. The final read-out was 11-2, 11-2, 11-6, 11-4 in Ho’s favour.