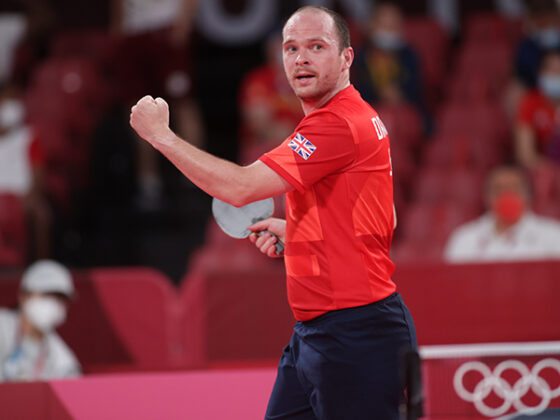 Paralympic medals, historic international performances, the return of domestic competition, a landmark diversity strategy, the launch of our centenary season and the discovery of an amazing 1920s film about table tennis – the second half of 2021 was certainly busy!

It began in July with the crowning of the first national champions for 16 months at the Mark Bates Ltd U10-U13 Nationals – and there was double delight for Sienna Jetha, Alyssa Nguyen and Kacper Piwowar, who won two titles each.

The following week saw the Cadet champions crowned, alongside the Junior winners at the Mark Bates Ltd Cadet & Junior Nationals.

Paul Drinkhall got the news he had been hoping for as he was added to the Team GB squad for the Tokyo Olympics as the legendary Vladimir Samsonov had to withdraw. And Paul certainly grabbed his chance as he powered into the last 32 with some eye-catching performances. Unfortunately, his run ended there, while Liam Pitchford and Tin-Tin Ho lost in their respective opening matches.

Meanwhile, Table Tennis England Director Priya Samuel helped the UK to succeed in its bid to host the International Working Group (IWG) on Women and Sport, and Matt Stanforth stepped up to be Head of England Performance.

And, as clubs and leagues around the country prepared to get local competition back under way, we launched our Return to the Table campaign.

August saw us cheering on our Paralympics stars, and they did not disappoint, bringing home seven medals from Tokyo, including Sue Bailey’s first medal in six Games appearances, alongside Megan Shackleton in the Class 4-5 women’s team.

Also on the team podiums were Will Bayley and Paul Karabardak in men’s class 6-7 and Aaron McKibbin, Ross Wilson and Billy Shilton in men’s class 8, while there were four medals in the singles.

But the month was not all about the Paralympics, as Sam Walker earned a landmark doubles title alongside Sweden’s Truls Moregard at the ITTF Czech Open, while Kelly Sibley came out of retirement after three years to help England qualify for the European Team Championships.

The inaugural Ping Pong Parkinson UK Championship was held at St Neots TTC, our Ping Pong Parlours initiative was a winner at the ukactive Awards, with TT Kidz highly commended, and we launched a new coaching grant scheme in memory of Keith ‘Charlie’ Childs.

September saw Kacper Piwowar become England’s first finalist at any level of WTT event as he reached the under-11 boys’ medal match at the WTT Youth Contender Varazdin.

He was quickly followed by Liam Pitchford & Paul Drinkhall, who reached the men’s doubles final at the WTT Star Contender in Doha.

There was also success for England at the ITTF Parkinson’s World Championships as Jan Fuller and George Chan earned five medals between them.

Continuing the diversity and inclusion theme in October, we updated our rules governing playing kit to be more flexible, in response to feedback from female players. We also published a landmark series of podcasts to mark Black History Month.

Our Ready to Return campaign was shortlisted in the Best Covid 19 Response category of the Sport Business Awards 2021.

Kacper Piwowar was again in the news, earning a place in the elite European Table Tennis Union under-13 squad. Staying with the performance set-up, England coach Ryan Jenkins was chosen by the ITTF for an important mentoring role.

England were knocked out of the European Championships by Denmark in the deciding game of the deciding match of their quarter-final.

An it was announced that Table Tennis England Chief Executive Sara Sutcliffe would be leaving her role after more than eight years.

November 7th saw us officially mark our 100th birthday as the sport’s governing body by launching a season of centenary celebrations which will continue well into next year.

It was also the month of the World Championships, where Liam Pitchford reached the last 16 and was beaten 4-3 in a thriller by China’s Liang Jingkun.

Pitchford & Paul Drinkhall got to the quarter-finals of the doubles, raising hopes that a major medal could be just around the corner for our leading duo.

In a month in which England and China went toe-to-toe in some momentous matches, Drinkhall beat world No 7 Lin Gaoyuan at the WTT Contender Lasko event.

Fliss Pickard won international gold at the French Para Open, adding to the title she won at the Spanish Open the previous month.

We launched our Level the Table Grant Scheme to support organisations creating opportunities for people to play table tennis, while funding awarded to table tennis clubs under the Sport England Return to Play Small Grants fund passed the £500,000 mark.

Two quick-thinking teenagers were praised for rushing to the aid of an opponent who collapsed during a local league match.

December saw a fascinating insight into the early days of our sport as we were able to broadcast the film Table Tennis Today, made by Ivor Monatgu, one of the sport’s founding fathers. The film was tracked down by John Ruderham of the Bristol & District League and we purchased the rights to broadcast it as part of the centenary celebrations.

Liam Pitchford qualified for the season-ending WTT Cup Finals in Singapore, reaching the quarter-finals for the first time and speaking of his aim to build on his impressive form next year.

There was a first international gold medal for Dan Bullen at the Para Copa Costa Rica, while Sam Walker & Tom Jarvis reached the doubles final at the WTT Feeder in Dusseldorf.

Table Tennis England appointed Adrian Christy as interim Chief Executive and there was a great example from the Coventry League of ours truly being a sport for all, for life as 14-year-old Alex Richards made his competitive debut against 91-year-old opponent Frank Gassor – and went on to win all three of his matches.