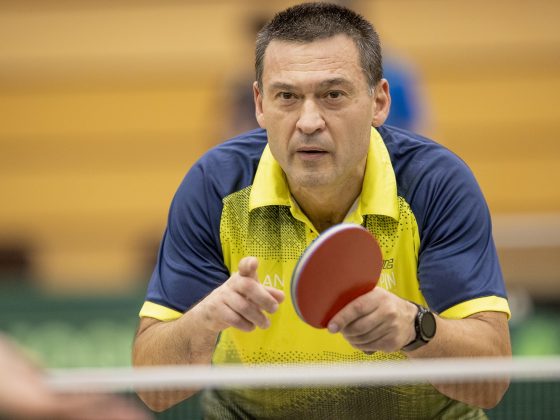 The Trumpauskas family also had an excellent tournament with Lorestas Trumpauskas reaching the Men’s singles final and winning the Mixed Veterans title, while his son Larry Trumpauskas won the Men’s Band 4 title.

Player of the tournament was Lara Whitton who played excellent throughout, coming runner up in the Women’s singles, winning the Women’s U21s and the Women’s Band 1.

Mabey won his group, and then went on to achieve 3-0 victories in all of his knockout rounds.

Bogdan Postudor took finalist Lorestas Trumpauskas to a fifth in the quarter-finals, as did Niall Cameron in the semi-final.

Top seed Grigory Vlasov withdrew from the competition, and second seed Darius Knight was knocked out in the quarter-finals by Niall Cameron.

Payet topped her group and then faced Letitia McMullan and Lara Whitton (player of the tournament) before finally winning 3-0 against Tiana Dennison (11-3, 11-7, 11-7).

5th seed Tiana Dennison had a tough ride to the final as number 8 seed Sara Williams took her to a fifth set in the semi-finals.

Player of the tournament Lara Whitton also put in a great performance in the Women’s singles, beating Millie Rogove 3-0 in quarter-finals before losing out to Payet in the semis.

After losing out to Sam Mabey in the Men’s singles final, Lorestas Trumpauskas triumphed over Andy Walker to take the Mixed Veterans title.

Bogdan Postudor played well during the Grand Prix but couldn’t quite finish any of his finals with a win.

Joshua Bruce fights hard in a 3-2 win over Rhys Hetherton in the Men’s U21 singles final.

Bruce had a difficult journey to get there and only one won of his knockout matches 3-0.

Sienna Jetha aged only 12, making her one of the youngest competitors at the Crawley Grand Prix actually went two sets up against the runner up of Band 4, Pickard in the the quarter-final, only to lose the next three.

Marquiori also achieved straight set wins over his opponents in both the last 16 and semi-finals.