Three through for England in Houston 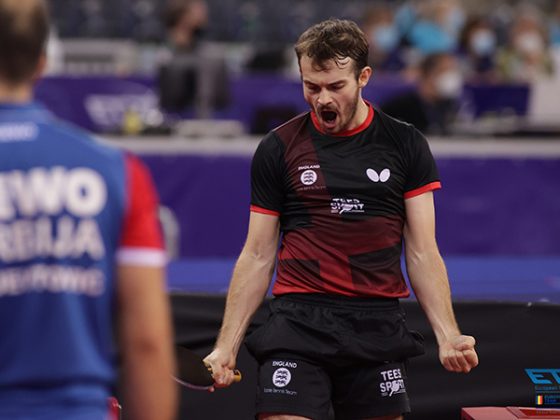 Liam Pitchford, Sam Walker and Tin-Tin Ho all made it safely through their first singles matches at the World Championships in Houston today, but Paul Drinkhall is out.

Walker was first on court against world No 147 Daniel Gonzalez of Puerto Rico and won with relative ease.

Walker showed greater consistency than his opponent and jumped on any loose serves, winning 25 of the 41 points which Gonzalez started.

The Puerto Rican did take the fourth, but it was only delaying the inevitable as Walker won the next 11-4 to complete a 4-1 victory which takes him into a tie against France’s 2016 European champion Emmanuel Lebesson, who beat Zokhid Kenjaev of Uzbekistan in five.

Drinkhall’s match against world No 24 Marcos Freitas – a pretty rotten draw for the round of 128 – saw him take first blood with a 12-10 margin in game 1.

The Portuguese left-hander fought back to level and the match arguably hinged on the third, Drinkhall saving three game points with some characteristically powerful shot-making but then seeing Freitas pilfer it 12-10 with help from a net cord, Paul’s face showing exactly what he thought about that stroke of fortune going against him.

Freitas turned up the heat to move 3-1 ahead and got himself over the line in the fifth, despite Drinkhall fighting back from 4-9 and 7-10 down, closing to within a point before Freitas took his third match point.

Ho recovered from being called for several service faults against Marie Migot of France – her ramrod-straight toss deemed to be a fraction too short of the required height on one occasion, and additionally being called for creeping over the edge of the table. Yet her opponent was allowed to send her toss practically back over her own shoulder at times.

But Ho put that behind her with a performance of focus, coming through some difficult periods and trying to keep Migot under pressure.

She could have wobbled when Migot (WR 176) levelled at 2-2 after the longest game of the match, but held it together to win the next two and book a clash with fifth seed Cheng I-Ching of Chinese Taipei in the last 64.

And so to Pitchford, up against a tricky opponent in Kou Lei of Ukraine, ranked 59. Pitchford, seeded 11th, avoided the banana skin – not having it all his own way, but always having enough of his own way.

He produced his most emphatic period of play after Kou Lei had levelled at 1-1, taking a 3-1 lead, and though he lost the next and then saw Kou save three match points in the sixth, Pitchford finally broke through to the last 64, where he will face world No 66 Alvaro Robles of Spain, who was mighty relieved to come through 4-3 against Mihai Bobocica of Italy.

* Wales’ Charlotte Carey was defeated 4-1 by Sabine Winter of Germany – ranked 54 places above her at 99 – in her first-round match in the Women’s Singles.

The next matches involving English athletes take place on Wednesday night at the following times (UK):