Three defending champions, five debutants and an athlete attending a second home Commonwealth Games are all in the squad named today by Team England for the table tennis and para table tennis competition at Birmingham 2022. 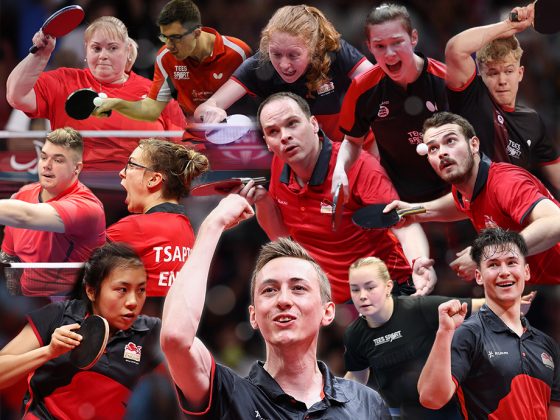 Three defending champions, five debutants and an athlete attending a second home Commonwealth Games are all in the squad named today by Team England for the table tennis and para table tennis competition at Birmingham 2022.

Liam Pitchford & Paul Drinkhall will defend the men’s doubles title they won in 2018, while Ross Wilson will aim to repeat his para gold from four years ago in Gold Coast.

They are joined in the squad by Sue Bailey, who was a para champion at Manchester 2002, the last time England hosted the Games.

West Midlands athlete Charlotte Bardsley has better cause than most to refer to the tournament as a home Games, while Mollie Patterson and Tom Jarvis are also set to experience the Commonwealths for the first time, as are para athletes Daniel Bullen and Jack Hunter-Spivey.

Bullen’s selection means he will stand down from the team of umpires, which was announced earlier this year.

Bailey, who was also a champion at the 2006 Games in Melbourne, said: “I’m thrilled to be selected for my third Commonwealth Games in Birmingham. Winning gold in Manchester and Melbourne was amazing, especially in front of a home crowd in Manchester.

“The Commonwealth Games is the only event where we are in a combined team with non-disabled athletes, and it is always special to be able to compete at home in front of family and friends who normally don’t get to see me play.”

Bardsley, who is from Stourbridge, said: “I’m really excited to be representing Team England at the Games and it feels particularly great because it’s in Birmingham.

“I’m very happy that all my hard work has paid off. It feels like I have been working for a long time towards this. It’ll be great to play in front of a home crowd and experience that. It’s such a big tournament and I’ve never experienced something like that, especially at home and being a multi-sport event.”

Jarvis, who has fought back from a major hip operation early in the pandemic to win his first national men’s singles title and move to the verge of the world’s top 100 this year, said: “With all the stuff that’s happened over the last few years, it’s great to be in the squad, especially with it being in England.

“I want to win gold in the team, that’s the focus for me, and I think the team is in a good place. I hope it’s going to be loud and a bit crazy in the hall, because it’s more fun to play when it’s like that.”

More Birmingham 2022 Commonwealth Games information and how to get tickets