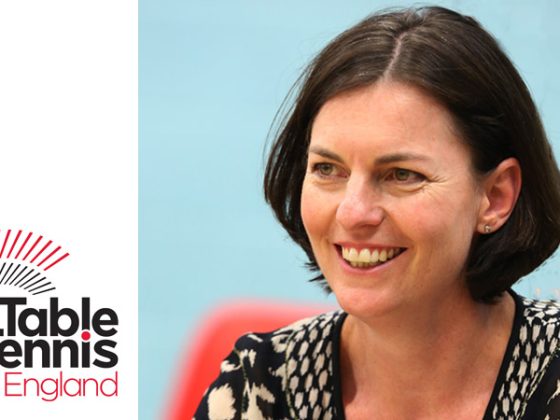 Table Tennis England Chief Executive Sara Sutcliffe is leaving her role after more than eight years. She will step down at the end of this year to take up a similar position with the Royal Yachting Association (RYA).

Sara joined the then ETTA as Chief Executive in July 2013, at a time when the organisation had failed to secure long-term funding from Sport England and an independent review had shown that the governing body and the sport were in need of a radical overhaul.

She oversaw fundamental changes to the structure and governance of the organisation, including the move from Hastings to Milton Keynes and the transition to the new identity of Table Tennis England. The changes culminated in the restoration of Sport England funding.

Since then, she has overseen sustained improvements in governance, performance and participation in the sport. Among the highlights of her time in office was leading the bid to host the ITTF Team World Cup in London in 2018, where the best players in the world thrilled sellout crowds at the Copper Box Arena.

Sara said: “Whilst I am excited by the challenges that lie ahead at the RYA, it is with a heavy heart that I am leaving Table Tennis England.

“In the eight-and-a-half years I have been the CEO there have been considerable improvements in governance, strategic planning, participation programmes and elite performance to name a few.

“It has of course been a huge team effort and I want to thank Sandra (Deaton, Chairman), the Board, the staff and all the wonderful volunteers for their support and contributions.

“Table tennis truly is a sport for all for life and puts a smile on the face of millions of people every year. I have thoroughly enjoyed and been honoured to play a part in the history of Table Tennis England and send everyone in the sport my very best wishes in this its centenary year.”

Paying tribute to Sara’s contribution, Table Tennis England Chairman Sandra Deaton said: “It has been my pleasure and delight to work side by side with Sara for the last eight-and-a-half years.

“She is the ultimate professional, who has been the backbone of the changes the sport needed to embrace. Taking the governing body into the next era, she has established the sport as a significant player within the industry.

“Sara’s ability to bring the team ethos into the direction of travel has cemented a strong and respectful relationship with the staff. The Board will be continually indebted to her for the guidance, support, respect and professional approach she has presented throughout her whole time with us.

“As she moves into the next stage of her illustrious career, I am delighted that she has secured such a high-level position within the sporting industry.

“Sara leaves us with an outstanding legacy and we will move forward building on this success. The Board will be focusing on this over the next few weeks and we will make the relevant announcements at the appropriate time.

“I am sure I can say with great confidence that all of us in the table tennis family wish Sara continued success and express our sincere thanks for all her devotion to our sport.”

Sara, a qualified lawyer who started her career in the City of London, moved on to the British Olympic Association, where she attended four Olympic Games as General Counsel to Team GB and was instrumental in the London 2012 bid. Following the London Olympics and Paralympics, she joined the ETTA.

Sara was awarded the MBE for services to table tennis in the delayed 2020 Queen’s Birthday Honours, and was presented with the award by the Princess Royal in a ceremony at Windsor Castle earlier this week.