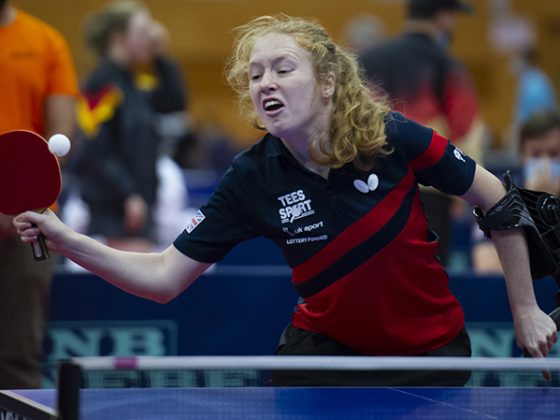 Fliss Pickard staged a tremendous comeback from 2-0 down against Katarzyna Marszal to beat the former world champion from Poland 3-2 in the final match of the women’s class 6 round-robin singles event at the ITTF Costa Brava Spanish Para Open in Platja d’Aro today.

Pickard began her singles event yesterday with a 3-0 win against Aianda Ardevol from Spain and looked to be heading for another comfortable win against Barbara Jablonka from Poland in her second match after taking the first two sets 11-6 and 11-1. But Jablonka fought back and edged the third game 13-11 before Pickard secured a 3-1 win 11-9 in the fourth.

Her final match today against world No 6 Marszal was to decide the gold medal and she showed all her character and determination to fight back after losing the first two sets and take the next three 11-4, 11-7, 11-4.

The 27-year-old from Burnley just missed out on qualification for Tokyo and was delighted to get back to winning ways.

“The singles tournament here has been good for me,” she said, “especially to be here with the younger Pathway squad players and see their improvements.

“I feel I have shown that when I am in control of my base game I can beat anyone in the world and I need to try and go in at this level from 0-0. It is always nice to win gold – another little step to where I want to be. Now I can’t wait for the team event with my amazing partner Grace (Williams).”

In his first group match Andrew Guy came from 2-1 down to beat the very experienced Endre Major, the class 1 European silver medallist from Hungary, 11-9 in the fifth. He consolidated that performance with a 3-0 win against Charlelie Arnaud from France to secure first place in the group and earn a bye into the semi-finals where he was beaten 3-0 by another Frenchman Julien Michaud.

The 36-year-old from Bovey Tracey is competing in his first international tournament here and was understandably delighted to take a medal.

“It was a really special experience for me playing at my first international competition,” he said. “I’ve learnt a lot about match preparation and now have a feel for the pressure on the international stage. I couldn’t have foreseen coming away with a medal so I’m over the moon with this and look forward to competing again soon.”

Martin Perry began with a 3-0 win against Francisco Rodriguez from Spain and then recovered from losing the first set to beat 18-year-old Benedikt Muller, the European team bronze medallist from Germany 3-1 and secure a bye into the semi-finals as group winner. He and his opponent Esteban Herrault had played three close matches in 2019 all won by Perry but today it was the Frenchman’s turn and he beat Perry 3-0 before going on to win the final and take the gold.

“It wasn’t a bad performance, to be honest,” said Perry. “I thought I played at a decent level but Herrault was just a little bit better. Of course, I’m disappointed to come away with bronze, especially being seeded second, I was hoping to get to the final but on the positive side I think I’ve highlighted a few areas where I want to work on in training and improve.

“It has felt good to be back playing and fighting for wins and world ranking points and the hunger is still definitely there. I’ve had some tough matches and been able to win them. There is plenty to work on and I’m looking forward to the team event now with Alex.”

Alex Bland started with a 3-0 win against Antonio Jose Consuegra from Spain and won the group with a fighting 3-2 win against Zbynek Lambert from Czech Republic, taking the first two sets 14-12 and then holding his nerve to take the deciding fifth 11-8 after the former world and European champion had levelled at 2-2.

He went on to win his quarter-final against 17-year-old Dutchman Yannick Paredis 3-0 but found Maksym Chudzicki, the Paralympic bronze medallist from Poland, just too strong in the semi-finals, losing the match 3-0.

“I think the singles went okay,” said the 22-year-old from Rotherham. “I don’t think I played my best but even when I wasn’t playing great I still managed to pull out a win by showing guile and composure – that is until I played Chudzicki. In that match he just played a little too good and I would have had to have been on the top of my game to win. There are plenty of things to take away from this tournament so far to work on and come back stronger next time.”

Theo Bishop lost his first match to Chudzicki 0-3 but joined Bland in the quarter-finals after a 3-0 win against 22-year-old Pablo Romero Parreno from Spain. He was beaten 3-0 by the very experienced Daniel Horut, the former European medallist from Czech Republic.

In her second international tournament, Grace Williams narrowly missed out on progressing to the knockout stages. After losing her first match 3-0 to fellow class 8 athlete Lucie Hautiere from France, the 2020 Chile Open silver medallist, she beat Maialen Etxebeste from Spain 3-0 and then put up a great fight against Frederique Van Hoof, the class 8 world No 16 from the Netherlands, leading 2-1 before the Paralympic team silver medallist came back to take the match 3-2.

Andrew Green came agonisingly close to winning his first international match, fighting back from 2-0 down to level at 2-2 against Yaqoub Alqasem before the former Asian Para Youth Games medallist secured the win 12-10 in the fifth. He went out after 3-0 losses to Mikhail Neystroev from Russia and Roberto Eder Rodriguez, the World team bronze medallist from Spain.

Dan Bullen and self-funded British athlete Simon Heaps were both drawn in group A and they had a terrific battle which Bullen eventually won 11-7 in the fifth. The 23-year-old from St Neots found the London 2012 Paralympic champion Tommy Urhaug too strong in his second match, the Norwegian world No 4 winning 3-0, and went out after a 3-1 loss to former US Open medallist Sem Roelofs from the Netherlands.

Heaps went on to lose to Urhaug (3-0) and Roelofs (3-1) while in group B class 4 athlete Lee York also failed to progress after 3-0 defeats to Sebastian Vegsund, the European team bronze medallist from Norway, and the Czech Open silver medallist Jiri Zak from Czech Republic and a narrow 3-2 defeat to Daniel Mateo from Spain.

Craig Allen had a tough opening match against the world No 11 Juan Bautista Perez Gonzalez from Spain, which the world and European bronze medallist won 3-0, and then put up a good fight against Barnabas Retter from Hungary, taking a tight fourth set 13-11 to level the match at 2-2 before the 25-year-old Hungarian won the deciding set 11-5.