Teenager Thomas Rayner was man-of-the-match as Ormesby defeated Fusion to move to the top of the Senior British League, Premier Division. 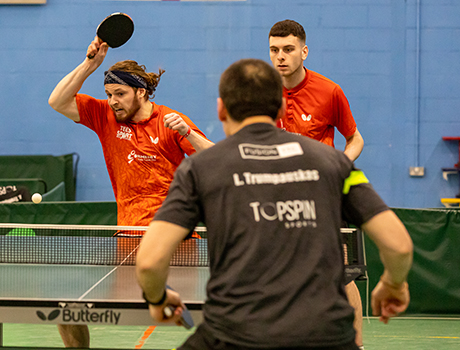 Teenager Thomas Rayner was man-of-the-match as Ormesby defeated Fusion to move to the top of the Senior British League, Premier Division.

Rayner (pictured above right in the doubles with Sam Mabey – picture by Chris Rayner), has played primarily for the club’s second team in the Championship this season and he picked up two vital victories to help his team recover from 2-1 down to defeat the Londoners 5-2.

Sam Mabey had given the hosts the perfect start with a routine 3-0 victory over Stephen Domingo, but Lorestas Trumpauskas restored parity in three against David Gofton.

It was Rayner who started the turnaround as he beat Pelc in three, and Mabey then put Ormesby on the brink of victory with a four-set win over Trumpauskas.

Rayner put the tie beyond doubt as he beat Domingo in three, and Gofton added a gloss thanks to a 3-1 triumph over Pelc.

The win lifted Ormesby to the top of the standings ahead of North Ayrshire, whose match at home to Archway did not take place because of the weather.

At the other end of the table, Urban picked up their first win of the season away to BATTS, and in some style as they came from 3-1 down to do so, with no fewer than five matches going to a deciding fifth game. It was also a match in which no player picked up more than one singles victory.

So it came down to a battle between two national champions – cadet gold medallist Hunter and under-13 winner Pattison. It went the may of Hunter by a 3-1 (11-9, 11-13, 11-9, 11-6) margin, sealing a victory which moves Urban level with their opponents on seven points.

Click here to check out all the stats from the Senior British League on TT Leagues.