The time has almost come to celebrate and honour the Pride of Table Tennis Awards finalists for their incredible efforts over the past 12 months. 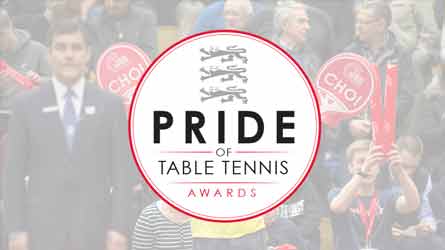 The time has almost come to celebrate and honour the Pride of Table Tennis Awards finalists for their incredible efforts over the past 12 months.

The Pride of Table Tennis Awards is our annual celebration honouring those who give up their time and make a positive impact on people’s lives.

More than 100 nominations have been received this year and this weekend will see the finalists recognised for going above and beyond.

“In such a special year for Table Tennis England, it is fitting we can recognise our inspirational volunteers and young volunteers at this year’s Centenary Gala Dinner in Nottingham. Congratulations and thank you to all of the finalists for their exceptional efforts this year and to all of the volunteers up and down the country, without your continued dedication and commitment, the sport would not be the same.”

The national judging panel has met and the finalists for each category are as follows:

Women’s Volunteer of the Year

Young Female Volunteer of the Year

Men’s Volunteer of the Year

Young Male Volunteer of the Year

The finalists will be honoured and the winners revealed at the Centenary Gala Dinner in Nottingham on Sunday.