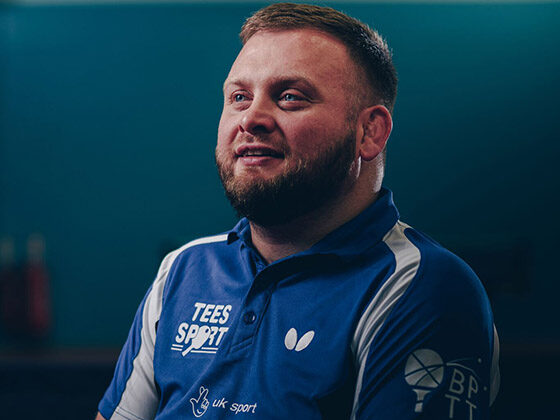 Born and bred in Wales, Rob played semi-professional rugby until he suffered a spinal cord injury while playing at the age of 21. In a bizarre twist of fate, at the same time that Rob was injured his twin brother Rich was involved in a serious car accident on the way to the match but went on to make a full recovery.

While undergoing rehab at Rookwood Hospital in Cardiff, Rob was encouraged to take up table tennis by Para table tennis international Sara Head and in 2007 he became part of the GB Development squad.

After taking silver medals in the individual and team events at the European championships in 2011 Rob realised his ambition of competing in the London 2012 Paralympic Games.

Inspired by competing in London he became European champion and World number one in 2013 and after taking silver in the World Championships in 2014 he went on to become Paralympic champion in Rio 2016 beating the Korean Young Dae Joo in the final 3-1 to take the gold.

In 2019 he won his fourth consecutive European singles title, an achievement that led to him being nominated again for the Male Para Table Tennis Star award at the prestigious 2019 ITTF Star Awards, but he was unable to defend his Paralympic title in Tokyo after he had to withdraw before the Games due to a shoulder injury.