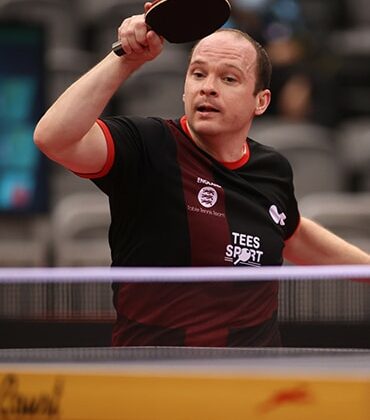 Paul has been at the top level of the game for well over a decade, first coming to prominence as European champion at Junior level and as silver medallist at the World Junior Championships. His achievements made him twice runner-up in the BBC Young Sports Personality of the Year award.

In the senior ranks, Paul became the first English winner of a World Tour event since 1996 when he won the 2014 Spanish Open, and later that year he and wife Jo were on the top step of the mixed doubles podium at the Glasgow Commonwealth Games. Paul ended that year as Russian Open finalist and with a place at the ITTF Grand Finals.

The following year, he was beaten in the bronze medal match at the inaugural European Games, while in 2016 he won the World Team Championships bronze medal alongside Liam Pitchford and Sam Walker.

The trio, with David McBeath and Tom Jarvis also in the squad, then added Team World Cup bronze on home soil in 2018 at the Copper Box Arena on London’s Queen Elizabeth Olympic Park.

He won a second Commonwealth Games gold at the 2018 edition of the Games in Australia, alongside Liam Pitchford in the Men’s Doubles, and in 2019, Paul became the first English player to win two World Tour events, winning the Serbia Open.

Paul was elected to the ETTU Athletes’ Commission in 2018. He and Jo have a young son, Dougie, and a daughter, Bonnie.