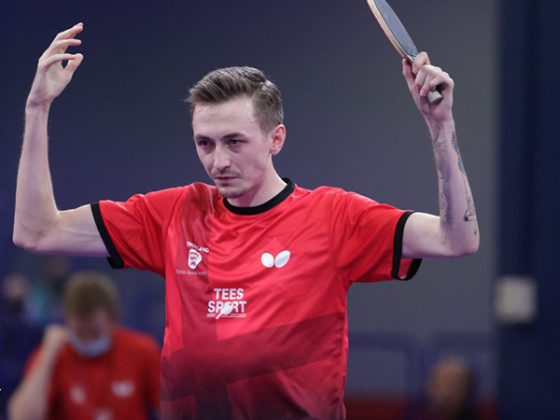 England No 1 Liam Pitchford heads to the season-ending WTT Cup Finals in good heart after narrowly missing out on the medals at the World Championships in Houston.

Pitchford & Paul Drinkhall reached the men’s doubles quarter-finals in Houston, where victory would have guaranteed bronze. However, they were defeated 3-1 (12-10, 10-12, 12-10, 11-5) by second seeds Shunsuke Togami & Yukiya Uda of Japan.

Pitchford has qualified for the WTT Finals for the second season in a row and will be looking to improve on last year’s showing, when he was beaten in the first match by Hugo Calderano of Brazil.

With 16 of the world’s top 20 competing in Singapore, it is one of the toughest competitions in the world. The draw has pitted Pitchford against Jang Woojin of South Korea, who he beat just over a year ago at the WTT in Macao.

The match is at 8am UK time on Saturday – follow the latest news from the event on the WTT website. The winner will face the winner of the clash between Wang Chuqin (CHN) and Lin Yun-Ju (TPE).

Pitchford said: “It’s exciting and another chance to have a go at the top guys. I’ve got a lot of confidence going into it from the Worlds. It’s where I want to be and cement myself at these events and do well.”