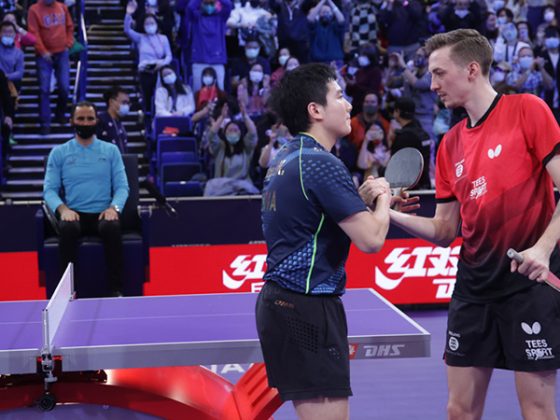 Liam Pitchford & Paul Drinkhall blew away the fifth seeds to make it into the quarter-finals of the men’s doubles at the World Championships in Houston – and Pitchford came oh so close to reaching the same stage in the singles.

Pitchford and sixth seed Liang Jingkun served up a classic encounter to get Friday night crowd at the George R Brown Convention Center out of its seats. The last-16 tie went the distance as Liam battled back from 3-1 down before the Chinese took the decider.

The first game could have been a highlights reel for a whole match, such was the quality on display from both men from the very first point, either up to the table or back.

We’ve seen Pitchford go toe-to-toe with Chinese opponents on several occasions, in memorable victories over Ma Long and Xu Xin and in two highly creditable defeats to Fan Zhendong, and here he was doing it again.

With both men taking turns to be the irresistible force and the immovable object, it went to deuce and Pitchford saw game points saved by Liang at 10-9 and 12-11, saving one of his own in between, before Liang took his own second chance to put the first game on the board.

The second was less high-octane – it could scarely not have been given the quality of the first – but Pitchford kept pace to 6-6, before a few loose receives on the Liang serve allowed the Chinese to win the next five points and take a 2-0 lead.

Those watching the live coverage might have heard Pitchford and coach Gavin Evans at the change of ends discussing the importance of varying the pace, and that was a discernible change in the third.

It paid dividends, 11th seed Pitchford building the platform to win the game by going from 3-5 down to 7-5 up and then clinching it 11-9, via a timeout taken after Liang closed from 9-6 to 9-8.

Pitchford was warming to his task, getting a vociferous crowd behind him, and clearly enjoying himself as the broad smile midway through the fourth attested. Liang, though, was adept at soaking up pressure and counter-attacking and he got himself on a run of five points to restore his two-game lead with an 11-6 margin.

Pitchford needed a good start to the fifth and got it, opening up an 8-3 lead and taking the game 11-7 – though potentially at a price as he needed some brief physio treatment at the change of ends.

Thankfully, there was no lasting problem and Pitchford seized on the momentum he had created, blitzing through the sixth 11-3 to take us to a decider.

Liang had looked a little like a boxer on the ropes in that sixth, but he cleared his head and, as Pitchford had done earlier, found a new level in the decider, finally quietening the Pitchford storm and taking it 11-4.

Pitchford will know a defeat is a defeat. Yet the manner of this one, forcing his opponent to fight for every ball and earn every point, knowing he can slug it out with anyone in the world, can only help his confidence. And it and is a sign that, after such a difficult year, he is back somewhere close to the level he hit just before the pandemic.

What seemed like an eternity earlier, Pitchford and Drinkhall were in perfect harmony in the doubles and always looked in control against Cedric Nuytinck & Jakub Dyjas, even in the close moments. A fast start gave them a 4-1 lead in the first and they kept in front all the way, taking their second game point to win it 11-9.

The second was more of a see-saw, but the English pair got to game point first as they recovered from 8-9 down. Drinkhall narrowly missed a forehand down the line on that game point, and they missed another chance when Pitchford took a tumble trying and narrowly failing to react to a net cord.

The only moment of possible alarm followed as the Belgian-Polish combination brought up a game point of their own, but Pitchford & Drinkhall stayed on the front foot and won the next three points to take a 2-0 lead.

There was another good start by the English pair in the third, forcing a timeout at 3-1, but they pulled away to lead 9-4 – reaching that score at the end of a brilliant rally which showcased their physicality and skill, criss-crossing, diving and stretching to make some seemingly impossible returns. A few points later, victory was theirs with an 11-6 scoreline in the third.