Pitchford flies the flag but Ho and Walker exit 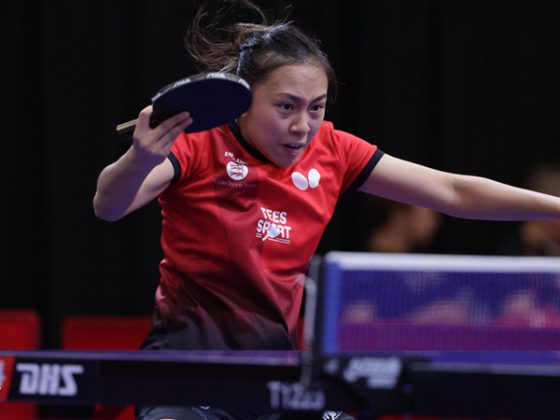 Liam Pitchford roared into the last 32 of the World Championships in Houston, but Tin-Tin Ho and Sam Walker were both beaten by higher-ranked opponents.

Pitchford was in the mood from the off against Spain’s Alvaro Robles (WR 66), killing rallies on the third or fourth shot at every opportunity as he raced through the first three games. So dominant was he that Robles was forced to take his timeout as early as 1-4 in the third.

The fourth was closer, Pitchford for the first time facing a deficit at 5-8. It was 9-9 seemingly in the blink of an eye, and a service fault against Robles, for not tossing the ball high enough, gave Pitchford a match point.

That fault riled Robles into action and he won the next three points – and then rode the bounce into the next game, which he led 6-3. But that was as good as it got for the Spaniard as Pitchford imposed himself again and took his second match point to move into the last 32.

His next match is against a player he knows well, Denmark’s world No 33 Jonathan Groth, a good friend who he beat 3-0 at the European Championships last month.

Earlier, Walker twice came from a game behind to level against 2016 European champion and world No 39 Emmanuel Lebesson of France.

In each of the first three games, the Englishman trailed 0-4, but while Lebesson increased the gap to take both the first and third, Walker fought back in the second, saving three game points at 8-10 and 10-11 and taking it 13-11.

When Walker built a lead of his own early in the fourth, converting it into an 11-5 win, it was all to play for at 2-2. It still was at 7-7 in the fifth, but a run of three points in a row by the Frenchman got him close enough to the line and he got over it at 11-8.

This time, Lebesson held his lead, rattling off three points after taking his timeout at 8-6 to go through to face world No 1 Fan Zhendong of China in the last 32.

In the Women’s Singles, Ho had no answer to the power of fifth seed Cheng I-Ching of Chinese Taipei as she went out in four straight.

It was a match characterised by quickfire duels with both players up to the table but, more often than not, Ho struggled to absorb her opponent’s power and keep the ball on the table, while world No 8 Cheng took every opening with ruthless efficiency.

Nowhere was that more starkly illustrated than in the fourth, which Ho led 3-2, only to see her hopes finally extinguished over the next nine blistering points – Cheng’s longest run of points in the match.

The last-32 doubles opponents are now known for the pairs involving English players, with Pitchford & Paul Drinkhall up against Nikhil Kumar & Kai Zhang of the host nation, who defeated Belarus pair Aleksandr Khanin & Pavel Platonov in three straight (13, 8, 8) in the men’s first round.

Meanwhile in the women’s, Ho and her Austrian partner Karoline Mischek will face Suthasini Sawettabut & Orawan Paranang of Thailand, who were routine 3-0 (11-6, 11-6, 11-4) winners over Polish pair Natalia Partyka & Natalia Bajor.

The next matches involving English athletes take place on Thursday night at the following times (UK):