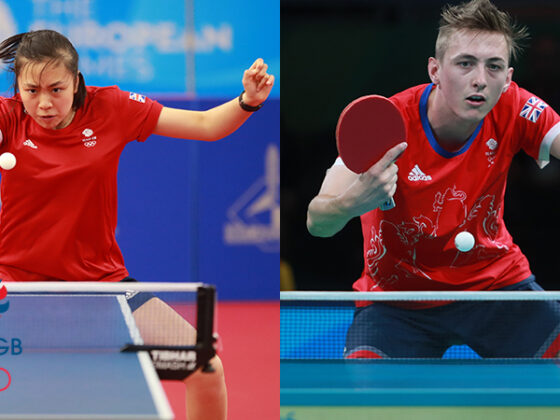 Tin-Tin Ho and Liam Pitchford are heading to the Tokyo Olympics with Team GB!

Our respective female and male No 1s have both been confirmed today as part of the team by the British Olympic Association.

Both qualify by virtue of their world rankings – Pitchford as the highest-ranked player in the world (No 15) who had not already qualified. It will be his third Games.

Ho’s qualification is momentous for British table tennis as our first woman to qualify in her own right for a quarter of a century, since Andrea Holt and Lisa Lomas-Bellinger represented Great Britain at Atlanta 1996. GB had host nation places at London 2012.

Ho, whose world ranking is No 93, is relishing her historic achievement – although the University of Nottingham medical student could be forgiven for having other things on her mind.

The 22-year-old said: “I’m very happy, of course, but I’m in the middle of exams at the moment, so I think I’ll process it all a bit later!

“Ever since I’ve been young, it’s been a dream to get to the Olympics but recently it’s been more prevalent. Since I didn’t make it to the Youth Olympics in 2014, I’ve had the goal to get to the senior Olympics.

“It was a bit of a surprise – I wasn’t expecting to get in by rankings and I was planning and working towards getting in by another route (the world and European qualifying tournaments), but that didn’t work out and it turned out rankings were my way in.

“It feels really cool to be part of Team GB. I got a glimpse of it at the European Games and it made me realised how big Team GB is, so to be part of that is an honour.”

Pitchford, 27, competed in the team events at both London 2012 Olympic Games and Rio 2016 Olympic Games, helping Team GB to reach the quarter-finals in the latter, where they were defeated by the all-conquering Chinese team. He also competed in the singles in Rio, reaching the last 32.

But he said the buzz of earning a place at his third Games was just the same.

He said: “Even though it’s been delayed for a year, it still feels amazing to qualify again. It’s going to be my third Olympics and I’m looking forward to it and hopefully I’ll have many more.

“I love being part of Team GB, we don’t get to experience that often, unlike some of the other sports. It’s just an honour, really, to be around so many great athletes and people wanting to achieve the same goals.

“It takes a bit of pressure off knowing you’re part of something that’s massive, and not a lot of people get to say they’re part of it.”

Pitchford and Ho have competed as part of the same England team at tournaments around the world for several years, including winning mixed doubles silver at both the 2014 and 2018 Commonwealth Games.

Pitchford added: “I’m really happy for Tin-Tin, and it’s not just for her but it’s good for women’s table tennis in Britain as well.

“It’s a massive boost in her career. She’s obviously performed well at Commonwealth Games and won medals. Hopefully, this will make her confidence go through the roof and that will help her to go out there and perform well.”

Team GB Chef de Mission, Mark England said: “Congratulations to both Liam and Tin-Tin on their selection to Team GB for Tokyo 2020.

“It is great to see Liam back competing at his third Games alongside Tin-Tin, who is our the first British female athlete to qualify for a Games since Atlanta 1996, a fantastic achievement for both her and the British Table Tennis Federation.”

Simon Mills, Table Tennis Team Leader for Tokyo 2020, added: “Congratulations to both athletes. For Liam to become a three-time Olympian at the age of only 27 is a huge achievement, while Tin-Tin’s qualification is a milestone in the development of the women’s game as well as a personal landmark. We look forward to supporting them to give their best possible performances in Tokyo.”

Before the duo head out to Japan, they can tune up as they lead the England squad for the European Championships in Poland, starting on June 22.