Pitchford and Drinkhall out of Olympics 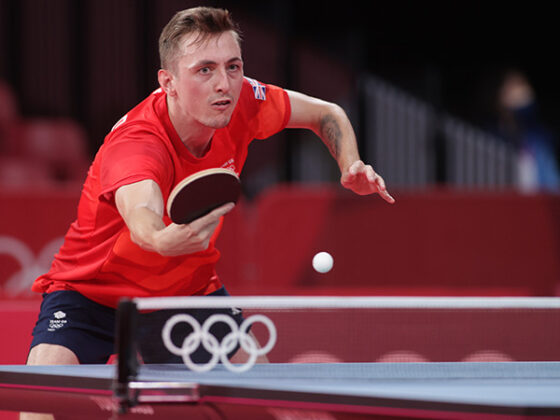 Liam Pitchford lamented missed chances and Paul Drinkhall spoke of lapses in concentration as both exited the Olympics in the last 32 of the men’s singles today.

Paul was beaten in five close games by ninth seed Jang Woojin of South Korea, while 11th seed Liam, entering the tournament at this stage, went out to 18th seed Darko Jorgic of Slovenia in six.

It was a close match as Liam showed flashes of his top level but also struggled to string points together in a match which had an average rally length of just four shots.

He particularly seemed to struggle with his timing on the receive and had greater success in the longer rallies. And although there were only three points in total between the players at the end, Liam spent only three points leading the match – one in the first game and two in the third.

Twice he came from a set down to level, showing great fortitude to stay in the match, but his frustration showed in the fifth when, 6-7 down, he swore and looked to the heavens, shouting “how many?” as he mis-timed a forehand.

“I’m not too happy, to be honest,” said Liam. “I had a lot of chances that I didn’t take and it’s frustrating because I felt I played all right, but when it was close I just didn’t take my chances. It is what it is but I’m gutted because I know I can play a lot better.

“Obviously, I had higher hopes for this than happened. It’s hard to come in first game of a tournament against somebody who’s already played and is a very good player on his day.

“I’ll hopefully reflect on it and look back and see what I did wrong then hopefully help me go forward.”

Paul had earlier started well in his match, opening up a 10-5 lead on his way to taking the first 11-7.

He led the second 9-7 and, as the match turned out, he probably needed to push home that advantage. However, Jang levelled on his second game point, 12-10, and thereafter kept his nose in front.

Neither player had strung together more than three or four successive points until the fourth game, when Jang turned a 5-1 deficit into a 7-5 lead and made it stick by taking the game 11-8 to lead 3-1.

A run of seven in the fourth, opening a 9-2 lead, then set the platform for him to complete victory, although Paul made him wait with his longest run of five to close to 9-7.

The longest rally of the match followed, a 30-shot epic, ended in agonising fashion with a side-edge in Jang’s favour to bring up a match point which he duly took.

Paul said: “I’m disappointed – not necessarily in the way I played – I think I played well and I’ve been playing well throughout the event.

“I just think a couple of lapses in concentration . . . they weren’t major but obviously against someone of that level, one little lapse and then all of a sudden you’ve lost five points in a row and there was a couple of times in that game where that happened.

“I was leading 5-1 or I was leading 9-7 and all of a sudden just one slight change, come off the ball a little bit and he took advantage of that. That’s the disappointing side of it.

Overall performance, playing wise, very happy. I think it’s just the mental side of the game I slipped a little bit too much.”