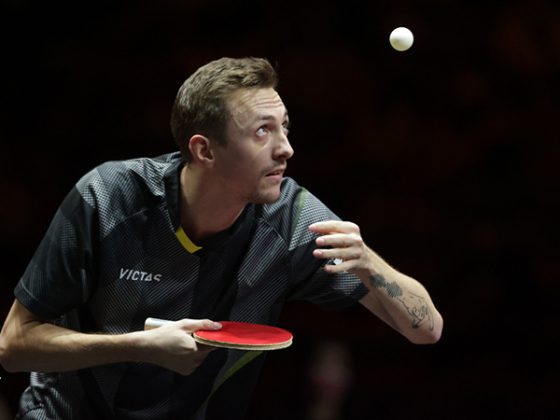 Liam Pitchford was pleased to break his WTT Cup Finals duck by reaching the quarter-finals and is now looking to build on the impressive form he has shown towards the end of this year.

The England No 1 defeated Jang Woojin of South Korea in his first match at the event in Singapore, becoming the first English player to win a match at the season-ending event since Carl Prean in 1996. It meant he went one better than his appearance last year, when he was defeated by Brazil’s Hugo Calderano in the first round.

Pitchford was defeated by China’s Wang Chuqin in the quarter-finals, missing out on a clash with world No 1 Fan Zhendong in the semis, but feels his performance in Singapore and at the World Championships in Houston immediately beforehand show he is getting back to his pre-pandemic best.

“Results-wise, it’s good to get to the quarter-finals, but I didn’t think I played as well as the World Championships,” he said. “I had an 18-hour flight from LA to Singapore and only a couple of days to recover before playing, so it wasn’t ideal, but I still won against the No 12 in the world so I’m not going to say it’s a bad thing.

“It was good to win my first match but I didn’t feel against Wang, apart from some points, I was really in the match. But it’s been a long year and I’m happy my levels improved towards the end of the year, and hopefully I can keep that going into the new year.

“I’m beating players ranked 10-50 in the world consistently and that’s what I’ve got to do to be where I am, but I want to be challenging the top 10 and I know I can.”

Pitchford travelled without a coach to Singapore, but it was a timeout when he was 2-1 and 4-2 down which allowed him to refocus and regain control of the match.

He said: “I just said to calm down and play your game. I knew he wasn’t in great shape either. I tried to slow the ball down and play with more spin and after the timeout I controlled the game.

“We didn’t know this event was happening until quite late on and the World Championships was the focus, so we decided it was better to let Gavin have some time with his family. It was okay – sometimes it’s good to be able to discuss what’s happened in a game with a coach, but it’s also good to be able to play on your own and work things out.”