Liam Pitchford & Paul Drinkhall are guaranteed at least a doubles silver medal – and both are also into the Commonwealth Games singles semi-finals. 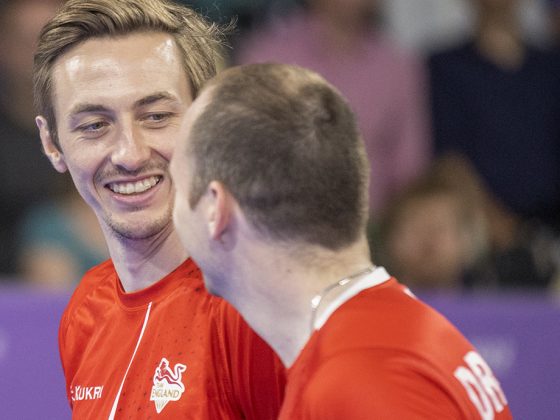 Pitchford and Drinkhall also both made it into the semi-finals of the Men’s Singles in Birmingham today – Drinkhall brilliantly beating top seed Quadri Aruna in five while Pitchford also won in five, against India’s Sanil Shetty.

Sam Walker was unable to make it three English players in the semis as he was defeated in six, despite a fine comeback and saving three match points against India’s Sathiyan Gnanasekaran.

English involvement in the Women’s Doubles also ended today, at the last-16 stage.

Top seeds Pitchford & Drinkhall were up against Zhe Yu Clarence Chew & Shao Feng Ethan Poh in the semi-final, and tore into their Singaporean opponents, taking the first two games for a combined loss of only six points and forcing Chew & Poh into an early timeout at 0-3 in the second.

Their opponents hit back to take the third, winning three successive points from 8-8, but the English pair were always in front in the fourth.

They saw a 9-4 lead reduced to 9-8 either side of their timeout, but they brought up two match points and took the second of them to send the arena wild.

They will face second seeds Sharath Kamal Achanta & Gnanasekaran in a repeat of the final of four years ago in Gold Coast.

The gold medal match is at 1.45pm tomorrow.

Sixth seed Drinkhall was simply too good for his opponent in every department, maintaining a high level which Aruna could only match in fits and starts.

The first two games were shared, Drinkhall winning the first and Aruna the second on his third game point.

Drinkhall had saved one of those game points with a fast, long serve which had Aruna groping for a return and opening up the table for an easy winner on the third ball, and Paul continued to move Aruna around and score winners off both flanks.

The third and fourth saw Paul always in front, leaving Aruna at times looking leaden-footed with his power and accuracy.

After a forehand flick by Paul made it 4-1 in the fifth, Aruna’s weary trudge to retrieve the ball was the body language of a beaten man.

Still, he managed to hang in at 6-4, when Drinkhall took his timeout to arrest a run of three lost points, taking a breath and making sure he got over the line, which he did 11-6.

Aruna was magnanimous in defeat, giving Paul a few friendly pats on the back as he gave a media interview after leaving court.

Paul said: “I knew it was going to be very tough. He’s the No.1 seed and silver medallist last time in 2018.

“I managed to jump ahead in the third and stay on top from there.”

Pitchford and Walker took to the court at the same time against Indian opposition. With Drinkhall and Achanta through, would it be three English, three Indians, or two from each nation into the semi-finals?

On paper, Pitchford had the easier task against 15th seed, the left-hander Sanil Shetty, while Walker, seeded seven, was up against third seed Sathiyan Gnanasekaran.

Pitchford lost the first 11-9 but levelled 11-6. The third is often pivotal, and so it proved as Pitchford recovered from 5-0 down, whittling it back to 8-7 and forcing an early timeout from Shetty. It didn’t help as Pitchford took the next four points and whipped up the crowd with a huge ‘come on’ which spoke of man with gathering belief that he will hunt down a medal.

He went on to take the next two sets with relatively few alarms and said afterwards: “It was a long day yesterday, six matches really took it out of me. I woke up this morning tired and wasn’t quite as focused from the start as yesterday.

“It took me a while to get into it but once I was, he couldn’t live with me. I need to do that every ball in the semi-final. I can’t give away sets and points like I did today.”

While Pitchford’s match was going on, Walker had endured a difficult start against Gnanasekaran, losing the first three.

He reduced the arrears with an 11-8 game in the fourth and, as Pitchford finished on the next court and Walker’s match became the centre of attention, Sam began to increase his own momentum.

He closed a deficit in the fifth but still faced three match points. Five points later Walker had won the game as Gnanasekaran became tentative, pushing a succession of balls long or into the net.

When Walker led the next 9-6, it looked like the great comeback was one, but there was to be no fairytale as the Indian proved he could also string together a run of five points as he booked a semi-final against PItchford.

Walker said afterwards: “I don’t think I played particularly well but I got myself back in the match. I was able to get into a position to get back to 3-3 and then I think I would have been the favourite but it doesn’t really matter because I lost.

“It was bad tactics from the beginning and I was a bit slow on my feet, there is no excuse for that, it is disappointing.”

So, in the semi-finals tomorrow afternoon, it is England versus India on both sides of the draw. As well as the clash between Pitchford & Gnanasekaran, Drinkhall will face fourth seed Achanta, who beat Yong Izaac Quek of Singapore 4-0 in his quarter-final.

Earlier in the day, English involvement in the Women’s Doubles ended in the last 16 with defeats for both pairs.

Charlotte Bardsley & Emily Bolton always had a tough task against Feng Tianwei & Zeng Jian, part of the team gold medal-winning line-up from Singapore and who both subsequently went on to reach the Women’s Singles final.

It was the first time on one of the show courts for Bolton but she handled the occasion well, it was just the quality of the opponents which dictated that it was to be her only appearance there. The final margin was 5, 5, 2.

Bolton said: “We tried our best to put our game onto them but they are strong and they had an answer to everything we threw at them.”

Tin-Tin Ho & Maria Tsaptsinos made a good start against their Australian opponents, Minhyung Jee & Jian Fang Lay, taking the first game 11-5. However, their opponents hit back to take the next three, though the English pair fought hard to prolong their stay in the competition before the Aussies got home 14-12 in the fourth.

Tsaptsinos said: “I’m heartbroken and upset. This means, for both of us, that the games are over. This is definitely not how we wanted this to go but they were a good opponent.

“We fought the best we could, we put out some good stuff, we were just a little bit unlucky.”