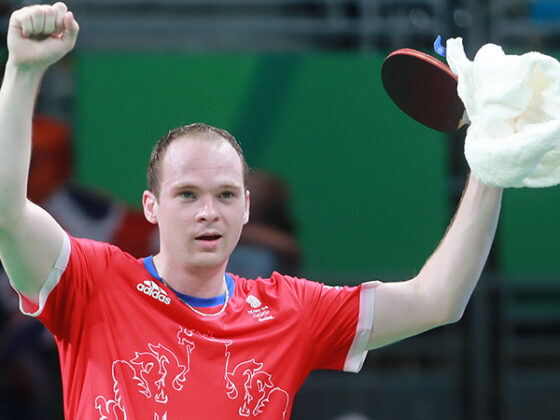 Paul Drinkhall has been added to the Team GB squad for the Tokyo Olympics!

It will be the third Olympic appearance for Drinkhall after London 2012 and Rio 2016.

The England No 2 is the beneficiary of the withdrawal through injury of table tennis legend Vladimir Samsonov of Belarus.

Drinkhall was the next eligible athlete on the world rankings and the British Olympic Association has approved his call-up, meaning he will join Liam Pitchford and Tin-Tin Ho in the Japanese capital later this month.

Drinkhall reached the last 32 in London and went one stage better in Rio, going out in the last 16, ironically at the hands of Samsonov. He also helped GB reach the quarter-finals, where they were defeated by China.

“It’s a shame for Vladi (Samsonov) that he’s had to withdraw – he was going for his seventh Olympics and is a table tennis legend, so it’s a shame that it’s come to me like that, but it’s good that I’m in a position where I’m next in line and I’m happy the BOA okayed me to take that spot.

“I’m looking forward to the challenge and aiming to do better than last time in Rio. I’m happy to be going to Tokyo to, hopefully, represent Britain well.”

Drinkhall has been in top-level action recently, having pushed eventual champion Timo Boll in the last 32 of the European Championships late last month.

He said: “I lost to the winner but gave him a very good game and came off disappointed because I felt I had a chance to win.

“I was happy with how I performed and it’s great going into the Olympics knowing that performance was just a couple of weeks ago and that if I perform like that, I will do well.”

Simon Mills, Table Tennis Team Leader for Tokyo 2020, added: “We’re delighted to be able to add Paul to the squad for Tokyo for what will be his third Olympics – a great achievement.

“Excitement is building as the Olympics draw nearer and I know there will be huge support in the British table tennis community for our trio of athletes in Tokyo. We’ll do everything we can to help them deliver their best performances.”