ParalympicsGB trio through to quarter-finals 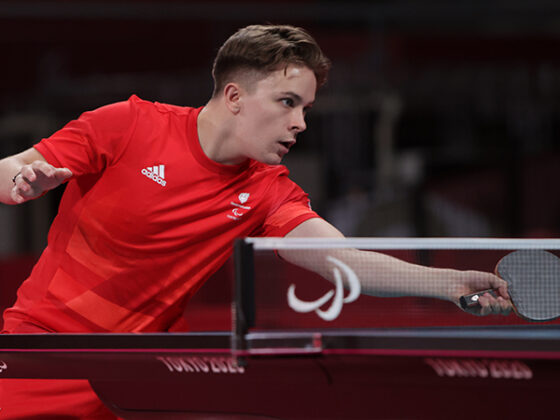 Paralympic champion Will Bayley is one of three ParalympicsGB table tennis players who made it through to the quarter-finals of their respective singles events in Tokyo this evening.

Click here to read the report from the morning session

Just a few hours after his emphatic win over the world No 2 Cheng Ming Chih, Hunter-Spivey was back on table 8 for his second and final group match against the Belgian Bart Brands, the 2018 Czech Open champion. He had to produce a very different type of performance this evening and did so with great character, digging in when Brands levelled at 1-1 and again when the world No 13 came back from 6-2 down to level at 8-8 in the fourth, taking the game 11-8 and the match 3-1.

“It was really tough,” said the 26-year-old Liverpool FC fan, “but as a squad we have managed that really well. I was in tears after my big win this morning but the coaches let me have my little bit of a moment then they said ‘we’ve got another job to do’ and that was crucial for me. The preparation has been incredible for each match – with the coaching team and with the psychology team – it has been amazing and I feel like I have just got the job done today.

“I didn’t feel great going into that last match because I was so high on the adrenalin from this morning and I didn’t have much time in between but I feel like I grafted. I’ll never give up on the table I’ll always fight for every point and I feel like I did that today.

“Fair play to Bart, he came out and he brought it. He was playing the best table tennis I’ve seen him play and he made me really have to work for the win. We’ve had close matches before and I’ve got a lot of respect for him as well.

“I’ll just try and chill out now before the quarter-finals tomorrow. What has been keeping me relaxed this tournament is the rooming in the village. I’ve had a perfect apartment with Will, Paul K, Tom and Megan – it’s been perfect to be with a group of mates and just to have that bit of de-stress.

“Even though Will has won the Paralympics he still makes the cups of tea of a night-time so it’s been good – we’ve got a good balance of experience in Will and PK (Karabardak) and we’ve got the excitement of Tom and Megan and me in between with a bit of both. It’s been incredible to keep us all positive and grounded and it shows in the results we’ve had today.”

Bayley found himself 7-2 down in the first game against the world No 10 Chalermpong Punpoo from Thailand but he gradually worked his way back and won it 11-9. The second was nip and tuck all the way to 8-8 before the 33-year-old defending champion took it 11-9 but he was down again in the third, Punpoo leading 8-4 before Bayley once again worked his way back to take it 11-9 and the match 3-0.

“Before the match I was a little bit nervous and I wasn’t feeling great,” admitted Bayley. “Physically I was feeling good but I was feeling quite tired and I wasn’t really awake and I think that added to the anxiety. I felt that it was going to be a hard match for me.

“He came out of the blocks flying and I expected that; I know how good he is so I was really pleased to come through that because it took a lot of mental fortitude to get through those sets.

“He beat me last time we played and every time we play it is a real battle. He is up for every point and fighting like mad so I’ve got a lot of respect for him.”

As group winner Bayley goes straight through to the quarter-finals and acknowledges that it is just step one in the defence of his title.

“I’m really pleased because every match is really difficult in class 7. To come through in straight sets today and 3-1 yesterday is pretty good but I know bigger challenges are in front of me in the quarter finals and that is what I am thinking about now – one match at a time so we’ll see who I get in the draw and let’s go.”

On his Paralympic debut, Billy Shilton needed to win his second group match to progress to the knockout stages and he knew little about his opponent Victor Farinloye from Nigeria, who had taken the world No 1 Viktor Didukh to five sets yesterday. After edging a tense first game 14-12 Shilton played superbly to take the next two sets 11-5 and 11-6 and the match 3-0.

“That first set was really important,” he acknowledged. “I got off to a good start then he clawed his way back in. I was leading 10-8 then it was 10-10 so I was happy to win the first set deuce and I think that really helped my confidence going forwards.

“I didn’t really have any targets before I came out here, to be honest – just to take every match at a time and just see what I can do. Try and play the way I know I can play on such a big stage and that happened today so I’m really happy.  It’s amazing to see the scale of everything and to see, for example, Will doing so well and how he copes with the pressure. It is inspiring and motivates me to be in that position in a few years.”

Results in the final group matches in men’s class 8 meant that both McKibbin and Wilson, who completed their matches this morning, finished runner-up in their respective groups.

In his final group match, Stacey took on the world No 6 Mohamed Amine Kalem with a place in the knockout stages to the winner. The 21-year-old from Cardiff had lost all his five previous matches to the Italian but won the first game 11-5 and the third 11-7 after Kalem had taken the second 11-8. In the fourth Stacey led 8-4 before Kalem fought his way back to take it 11-9 and force a decider and it appeared as if the experience of the Rio 2016 bronze medallist would prove decisive. However, the young Welshman had other ideas and he played superbly to take the game 11-7 and the match 3-2.

“It was important to start well,” said Stacey, “and I think it meant that he guessed a lot more on my service which gave me the openings I needed. Because of his backhand rubber the anti-spin makes it really hard as you can’t really find your rhythm because the game will go from quick to slow within literally a single shot. So for him to be guessing where my service was going gave me a chance on my serve ball to attack him a bit more and it definitely put him under pressure.

“Although I lost the fourth set it was more that he played a few better balls and had taken opportunities he hadn’t really taken through the match. Luck was on his side slightly – I think he got three nets which obviously helps – but I didn’t really let it get to me. I just thought ‘my process got me 8-3 up why can’t it help me win this fifth set’. Thankfully it did.

“I was quite open to see what happened out here and how I could perform. Obviously I’ve just performed really well and of course it feels great to get to the quarters – it is one match away from a medal but I’ll definitely be taking whoever I play next in my stride and do my best to beat them.”

Ashley Facey Thompson could not quite produce the form that saw him beat Iurii Nozdrunov this morning and he went out of the men’s class 9 singles after losing 3-1 to the 20-year-old world No 4 and European silver medallist Lev Kats from Ukraine.

“I’ve reached my second Games and I’m proud to be here,” said Facey Thompson. “In Rio I didn’t really compete at all and it was all about experience but I came here to compete and I’ve done that. It could have been a different story if I had taken Koyo (Iwabuchi) yesterday. I felt that was the one I could have won and then I’d have been through.”

The 26-year-old Londoner will now focus on the team event where he will join up with Stacey.

“Me and Josh are a good team and I’m looking forward to the team event,” he said. “Josh is still in singles and hopefully he gets a good draw. He’s full of confidence and I hope he does well.”