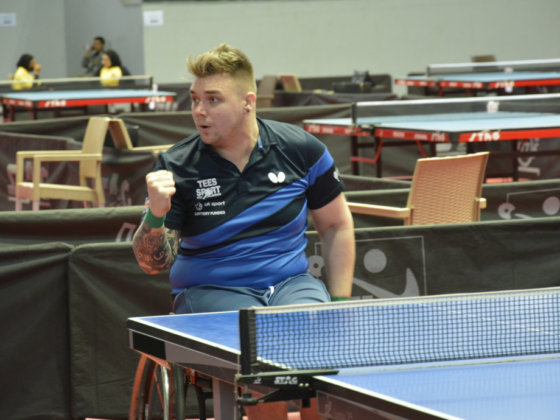 Top seed Hunter-Spivey began with a 3-0 win against 21-year-old Hussain Albannai from Kuwait. A 3-0 win against the African champion Ayman Kamal Abdelghafar Zenaty from Egypt sent him through to the knockout stages and as group winner he received a bye into the semi-finals. His opponent was Ehab Fetir and the former top 10 player from Egypt started well, taking the first set and edging the second 13-11 to lead 2-0. Hunter-Spivey fought back to level at 2-2 and then held his nerve in the decider to take it 13-11 and the match 3-2.

The 26-year-old from Liverpool had to fight hard again in the final against the experienced Belgian Bart Brands, coming back from 2-1 down to level at 2-2 before running away with the deciding set 11-1 to take the match 3-2 and the gold.

“It feels great to win my first tournament after Tokyo,” said Hunter-Spivey. “Everything I’ve been working on in the training hall is going well. I’ve had two absolute battles against two great opponents that could have gone either way, but I really applied what I’ve been working on at home. I didn’t play my best level overall, but I really did pull myself up by my bootstraps and got the job done and I’m really proud of myself for that.”

Last week’s Costa Brava Spanish Open champion Stacey was always in control in a 3-0 win against Elleingand Etche Fattoh from Cote d’Ivoire in his first match and he followed that with another comfortable 3-0 win against African Championship medallist Hossam Elsayed from Egypt. He received a walkover in his final match against Abdullah Qasem from Kuwait and as group winner also received a bye into the semi-finals.

The 22-year-old Welshman dropped the first set against Dezso Bereczki from Hungary but recovered to beat the former European medallist 3-1 and go through to the final where he faced the Paralympic, World and European champion Laurens Devos. The 21-year-old Belgian hasn’t lost a match in men’s class 9 since 2015 and although Stacey has made great progress since their only previous meeting in 2017 the World number one won in three close sets.

“Overall it was a positive singles tournament for me,” said Stacey. “Playing Devos for the second time was a good experience and I felt that I was in a lot of the points, but his quality really showed at the back end of the sets. I’m looking forward to the doubles now with Theo (Bishop) and Grace (Williams) and seeing what we can do.”

Dan Bullen and self-funded British athlete Simon Heaps had met twice before in international tournaments with Bullen having won them both but their most recent match in last year’s Costa Brava Spanish Open went to five sets and it was Heaps who was just the stronger on this occasion, winning in four close sets. Bullen lost his second match in men’s class 5 to former World team medallist Hassan Tolba from Egypt 3-1 and a 3-0 win in his final match against 18-year-old Fahad Abdullah from Kuwait was not enough to see him through to the knockout stages.

Heaps followed his win against Bullen with a 3-0 win against Abdullah and although he lost his final match to Tolba 3-0 he went through to the quarterfinals where he lost 3-0 to Fetir.

Self-funded Scott Robertson is competing in his first international tournament since London 2012 and the four-time Paralympian showed he has retained his ability in his first match against Belgian World number 13 Bart Brands despite a 3-0 loss. He did not progress to the knockout stages of men’s class 5 after a 3-1 loss to Fetir.

Lee York did not progress from his group in men’s class 4 after a 3-0 loss to World number 10 and London 2012 Paralympic bronze medallist Mohamed Eid Saleh from Egypt and a great battle with Sumit Sehgal from India in which he fought back from 2-1 down to win the fourth 12-10 and level at 2-2 before losing the deciding set 11-9.

Theo Bishop had a tough opening match in men’s class 7 against World bronze medallist Sayed Youssef from Egypt but after a slow start he came back to win the second set and level at 1-1 before the World number seven went on to win 3-1. The 18-year-old did not progress from his group after a 3-0 loss to Saeed Al Adilee from Iraq.

Women’s class 7-8 was played in a round-robin format and Grace Williams lost her opening match to 34-year-old Samah Abdelaziz from Egypt 3-0. She kept her hopes of a medal alive with a determined 3-1 win against Dalia Zaki from Egypt but finished in fourth place after a 3-0 loss to last year’s French Open silver medallist and class 8 World number 18 Lucie Hautiere from France.

The tournament continues until Saturday with the doubles events.

The full list of British athletes competing in the Egypt Para Open is: